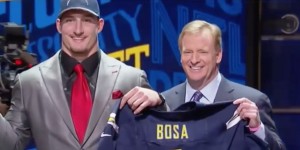 The San Diego Chargers and their first-round draft pick, No. 3 overall selection Joey Bosa, remain locked in a bitter contract dispute with just two weeks left until the start of the NFL season. And according to a new report, general managers around the league are dumbfounded at how the Chargers have handled the stalemate.

An article posted on Bleacher Report Friday written by Mike Freeman says that league executives believes the Chargers have already done irreparable harm to the rookie.

The article quotes an unidentified NFC general manager as saying Bosa “may not be a Charger,” because of the stalled contract talks. A source close to Bosa says that possibility is “slim but growing every day.”

If Bosa does not sign a contract, he goes back in the draft next year and is eligible to be chosen by any team other than San Diego.

The Chargers have been desperately trying to get public opinion on their side. (And as we posted several weeks ago, they have the NFL on their side in that endeavor.) The team released a statement on Wednesday, after pulling what they claim is their best offer.

Bosa’s agent issued a response which accused the Chargers of manipulating the facts.