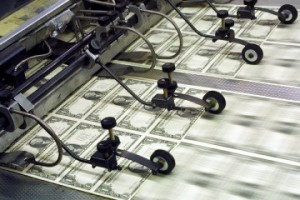 This AP Fact Check from over the weekend seemed to have slid under a lot of radars. It’s a quiet item that received little fanfare but cuts straight to the heart of current economic policy and inflamed political rhetoric, specifically the contention that the U.S.’s enormously high debt is due to a weak economy and not “runaway” government spending.

Of course a incredibly common refrain among GOP presidential candidates has been the belief that the U.S.’s presently increased debt is correlative with an increase in government spending, especially under the Obama administration. But this rather significant political point has gone mostly unchecked, and has been repeated so often that its completely believed to be fact, in the same way that our ancestors were dead certain that the earth was flat. In fact, it’s not an unreasonable concept, and has reasonably shape congress’s debt debates this past summer. But the AP now reports that “the math isn’t so simple,” and that what the Republican’s assumption fails (or maybe neglects) to account for is recession.

“The number at the heart of the battle cry of the Republicans and their tea party allies — that federal spending has risen to an alarming 25 percent of the economy — is skewed by recession dynamics,” they contest. Worried only that the government is spending too much without making enough back, Republicans are not accounting for a country’s increased needs during recession periods. And so, governments hoping to maintain the basic needs of their citizens must brace for an increase in spending, and accordingly, debt.

This disparity between what comes in and what goes out plays into the Republican argument about runaway spending.

But it also reflects the mathematical reality that during recessions, tax revenues go down sharply because people and companies make less money and so pay less in taxes. Federal spending goes up, even before stimulus programs, with an increasing demand for government help from food stamps and unemployment compensation and other safety-net programs.

At the same time, the negative economic growth associated with recessions lowers the GDP number on the bottom of the equation, further boosting the ratio of spending to GDP.

Which all goes to show that, contrary to common political rallying cries, the increase is not the result of poor political decisions, but the poor economic climate. When there is a recession, these things happen; and the increased levels of spending are put in place to help ease the nation into recovery.

And so, if this particular report is to believed at face value, then the GOP rhetoric on runaway government spending is likely off target, though it has certainly been a politically expedient talking point. But it’s not like anybody else comes out looking much better, having allowed this bit of GOP propaganda be spun into fact. As economist Bruce Bartlett, quoted in the AP’s story, says: “what sometimes makes me cringe more is the silence from their competitors.”

Read the rest of the report here.