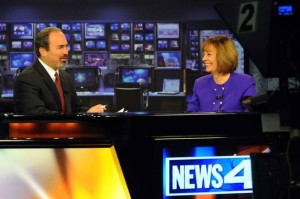 Hot Air’s Ed Morrissey (one of Matt Lewis‘ Top 25 Twitter Conservatives) scored a hell of an exclusive, giving Nevada candidate for US Senate Sharron Angle a chance to allay concerns that she’s a closet birther. She also took the opportunity to back away from her controversial comments about those spoiled unemployed brats. Angle makes the sale on the first count, but not the second, and doesn’t touch her prescription for 2nd Amendment remedies to legislative ills.

Angle got into some trouble with her too-cute answer to a question about President Obama’s birthplace:

…she appeared on the conservative blog talk show Libertarian Politics Live, when Angle was asked by a caller whether she had “any doubts whether or not President Obama is a legitimate president or a naturalized born citizen.”

“You know I think our Supreme Court has pretty much made that decision,” Angle said.

I read that remark as a big fat wink to the Birthers, and so did others. Angle pushed back to Hot Air’s Ed Morrissey:

I asked her “flat out” whether she believed Barack Obama was born somewhere other than Hawaii, and she replied, “No.  Is that flat-out enough for you?”  Angle says she “wasn’t dodging” the caller on the radio show now being parsed by the media, in which she replied that the Supreme Court had already ruled on that issue, but instead wanted to talk about Obama’s political qualifications and wanted to politely redirect the conversation.  Angle believes that Obama was born in Hawaii and is an American citizen, and also believes that those subjects are nothing more than a distraction that Democrats use to keep attention from their track record.

That’s reasonable enough, I suppose, but her original remark still seems like an effort to avoid offending birthers. Hey, why not? They vote too, don’t they?

Angle also apologized for remarks she made about spoiled unemployment recipients, too enamored of benefit extensions to go out and take the many jobs she seemed to think sat vacant. Well, she sort of apologized:

On joblessness, Angle apologized for a statement that “was too strongly worded,” regarding people who are currently drawing unemployment.

“Too strongly worded.” So, not spoiled, but maybe just smelling a little funny.

Angle didn’t touch on an earlier controversy, in which she seemed to suggest that armed rebellion might be a reluctant next step:

Angle: I feel that the Second Amendment is the right to keep and bear arms for our citizenry. This not for someone who’s in the military. This not for law enforcement. This is for us. And in fact when you read that Constitution and the founding fathers, they intended this to stop tyranny. This is for us when our government becomes tyrannical…

Manders: If we needed it at any time in history, it might be right now.

Angle: Well it’s to defend ourselves. And you know, I’m hoping that we’re not getting to Second Amendment remedies. I hope the vote will be the cure for the Harry Reid problems.

The sentiments are not a one-off.

As Jonathan Karl reported earlier this month, she told the Reno Gazette-Journal that people are quietly stocking up on ammunition in case they need to resort to insurrection or, as she put it, a “fight for liberty.”

Angle is also under fire for her extreme positions on abortion.

Harry Reid has his work cut out for him, as he still trails Angle in some polls, or leads with less than 50% in others, but Angle is a relatively unknown quantity. Prior to the GOP primary, much of the attention in the Nevada race focused on chicken lady Sue Lowden.

Reid faces an undeniable popularity problem, but with a gaffe machine like this, and several months in which to amplify it, there may be hope for him yet.