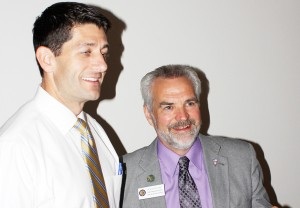 Vice Presidential candidate Paul Ryan, who repeatedly tried to codify a distinction between “forcible rape” and the other kind(?) into federal law, has now had to denounce another GOP lawmaker who drew a similar distinction in plainer English. Hot on the heels of the Todd Akin (R-MO) “Legitimate Rape” controversy, Ryan has now withdrawn his endorsement of State Rep. Roger Rivard (R-WI 75th) over comments he made about advice his father gave cautioning him that “some girls, they rape so easy.”

Rivard, oddly enough, got himself into trouble while trying to add context to remarks he made in December. What he told The Milaukee Journal Sentinel didn’t really help all that much:

The newspaper quoted him as saying his father warned him, “Some girls rape easy” – meaning that after the fact they can change what they say about whether sex was consensual. On Wednesday, Rivard told the Journal Sentinel that the article did not provide full context of his comments and that his father’s exact words had been slightly different from how they appeared in the Chetek Alert.

He told the Journal Sentinel that his father had advised him not to have premarital sex, and he took that seriously.

“He also told me one thing, ‘If you do (have premarital sex), just remember, consensual sex can turn into rape in an awful hurry,’ ” Rivard said. “Because all of a sudden a young lady gets pregnant and the parents are madder than a wet hen and she’s not going to say, ‘Oh, yeah, I was part of the program.’ All that she has to say or the parents have to say is it was rape because she’s underage. And he just said, ‘Remember, Roger, if you go down that road, some girls,’ he said, ‘they rape so easy.’

“What the whole genesis of it was, it was advice to me, telling me, ‘If you’re going to go down that road, you may have consensual sex that night and then the next morning it may be rape.’ So the way he said it was, ‘Just remember, Roger, some girls, they rape so easy. It may be rape the next morning.’

“So it’s been kind of taken out of context.”

That same notion, that rape is often just a concoction of wicked little underage temptresses was floated by Todd Akin, and in defense of him, and is also at the heart of the “forcible rape” language that Rep. Paul Ryan repeatedly tried to force into federal law. Those measures never explained the particulars of the distinction, or how it would or could be verified, leaving it open to several interpretations. The kindest of these is that it was a way to exclude statutory rape, “which involves a minor unable to legally consent or a person who lacks mental capacity for legal consent.”

That means that if a 42 year-old man impregnates a 10 year-old girl, unless that man was her father, Paul Ryan reasoned that there was some level of consent, that the little girl kinda deserves what she got. That’s not the same as what Rivard said, but is kinda worse, in a very real way.

Another possibility is the one Rep. Akin laid out for Dana Loesch, that a “legitimate rape,” which he says was meant to come out as “forcible rape,” is a designation that eliminates false rapes. Perhaps Ryan’s reasoning was that, unless a woman can show serious physical injuries, or other evidence of force, like a weapon or ligature marks, then she could be lying, and probably is. The Bible says so, y’know.

But even though Paul Ryan’s legislative record lines up pretty well with Rivard’s remarks, he did rush to denounce them. Through a spokesman. From his congressional campaign:

“State Representative Rivard’s comments are outrageous and offensive,” his statement said. “Congressman Ryan believes there is no place in our discourse for rhetoric such as this. Congressman Ryan cannot support Mr. Rivard or his indefensible comments.”

As the dust settles from last night’s vice-presidential debate (at which Ryan confirmed that he believes that whether you were “forcibly raped” or just consensually child-raped by a grown man, you should be forced to keep that cute little bean),  let’s see if any reporters get the gumption, and the opportunity, to ask Ryan what the difference is between his idea of non-forcible rape, and Rivard’s “easy rape.”