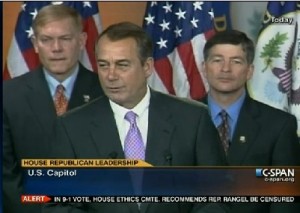 Republican leaders, citing “scheduling conflicts,” skipped an invitation to a bipartisan meeting with President Obama and Democratic leaders at the White House yesterday. One such pressing engagement was a press conference to roll out the new GOP House leadership, at which Speaker designate John Boehner said he was “looking forward to” meeting with the President on Nov. 30. Boehner didn’t explain, and no one asked, why it would take two weeks for the Republicans to go a few blocks to the White House.

While Boehner only touched briefly on the subject of the Bush tax cuts, he also held forth on blocking appropriations, Charlie Rangel‘s ethics hearing, repealing health care reform, and a priceless dodge of a question about the government’s successful bailout of GM.

Asked about Senate Minority Leader Mitch McConnell’s promise to block an omnibus bill, Boehner replied “I think it’s a shame that the Democrat majority in Congress didn’t pass a budget,” which is a bit like the rain saying it’s a shame the ground couldn’t stay dry.

Boehner also dodged a question about raising the debt ceiling, but the highlight (such as it was) of the press conference was the pregnant pause following a question about whether the bailout of GM (just vindicated by yesterday’s successful IPO) had saved jobs, after which Boehner elected to answer a question he made up in his head.

Here’s the video of Boehner’s portion of the press conference: (from C-Span 3)

Congressional aides told Politico that the Republicans’ decision to postpone the meeting with the White House stemmed from lingering soreness over the President’s appearance at January’s House Republican Issues Conference:

The one-sided televised presidential lecture, which many Republicans decried as a political ambush — Obama’s staff wanted the event to be broadcast and GOP aides agreed reluctantly at the last minute — has left a lingering distrust of Obama invitations and a wariness about accommodating every scheduling request emanating from the West Wing, aides tell POLITICO.
“He has a ways to go to rebuild the trust,” said a top Republican Hill staffer. “The Baltimore thing was unbelievable. There were [House Republicans] who only knew Obama was coming when they saw Secret Service guys scouting out the place.”

TPM points out that the Republicans are engaging in some revisionism, as they eagerly invited the President to that “ambush,” and with plenty of notice. What was done at the last minute was the White House’s request to televise the event, but had Republicans done a better job of questioning the President, this surely would have cut in their favor.
Meanwhile, despite signals to the contrary, the White House and Democratic leaders who did attend yesterday’s meeting have decided to pursue tax cuts for the middle class only:

Senate Democratic leader Harry Reid said he believes he has President Barack Obama’s support in pursuing tax cuts for everyone except the wealthy, after some concern that Obama had been ready to deal with Republicans over cuts for the rich.

Without the votes to overcome a GOP filibuster, such a plan offers little chance of success, but does afford the Republicans a chance to explain to Americans why they’re holding middle class tax cuts for ransom to benefit the wealthy.

“The main thing we’ve learned is that we’re united in recognizing that we have to protect the middle class,” Reid told reporters.