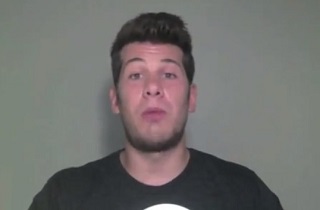 The testimony of Rachel Jeantel at George Zimmerman‘s murder trial has become an excuse for people to take all kinds of shots at all kinds of people, especially white people who think Trayvon Martin‘s alleged use of the word “cracker” is a license for them to use the n-word. You can add conservative “comedian” Steven Crowder and ” retarded” people to the list, as the ” comic” has released a YouTube video in which he “edgily” mocks Rachel Jeantel’s speech, calls her “retarded,” and asserts his own privilege to use the word “retarded” on people who are “retarded.”

You might remember Crowder as the rape-joking dick who assaults people, then whines when he gets flattened. On Thursday, Crowder released a hilarious YouTube video entitled “‘Retarded’ Racist Zimmerman Trial Witness!!”

In the video, Crowder makes hilarious sarcasms about how white people affectionately call each other creepy-ass crackers all the time, and also points out the linguistic distinction between ” cracker” and “cracka.”

Then, he moves on to Jeantel’s “problematic” use of the word “retarded,” which Crowder says could be offensive, “especially considering how many conservatives have been treated for using that word, like Ann Coulter and notable politicians.”

I’m going to stop Crowder for a second to point out that some of the people who gave Ann Coulter hell for calling President Obama “the Retard” were, in fact, other conservatives, including Michelle Malkin. You know who did not demand Coulter’s firing, or threaten to kick Coulter’s ass, or say anything at all when Coulter used the word “retard?”

That’d be Sarah Palin, whose concern for attacks on special needs kids begins and ends along political lines, just like the right-winger who defended Trig Palin from Bill Maher by heckling a Halliburton joke. These people sell their own kids out to make cheap partisan points, and the result is people like Steven Crowder. If Sarah Palin threatens to kick Crowder’ s ass over this. I will devote an entire column to writing the words “I was wrong about Sarah Palin” 500 times.

Crowder goes on to explain that Jeantel’s use of “retarded” is different, because “according to the records, the star witness, Rachel, as you’ve seen, would appear to be (smug pause) a special needs person. So she can say the word, she can say that something is retarded. You and I can’t use the word, but only people with special needs can call each other retarded.”

This is really pretty simple. Steven Crowder, or anyone else, doesn’t need a pass to say “retard” or “nigger.” This is the United States of America, so if it feels that good to you, don’t wait around for someone to give you permission by saying “cracker,” just do it already. They are not the same thing, and never will be, but you do not need a pass, or permission, to say it.

In the case of “retard,”  you’ve really got it made, because if you’re a conservative, you won’t get yelled at by Sarah Palin, and if you’re a liberal, you won’t get yelled at at all, or hardly at all. The only people you’ll be hurting are special needs kids and their families, who really have too much to worry about to fight back. Nothing is stopping you, so don’t go through the bother of producing a dumb-ass YouTube video to get your jollies. Just do it.

However, I’m glad Steven did this, because it gives me the opportunity to specifically address Rachel Jeantel’s use of the word, which many people felt I “gave her a pass” on. I didn’t “give her a pass” (they’re unnecessary, and not mine to give), but it’s true that I didn’t specifically address my commentary to that word. There were more newsworthy points to be made, and there wasn’t an appropriate place for such a commentary, but now there is.

Crowder’s “edgy” bit perfectly illustrates why I would not beat up on Rachel Jeantel for using the word “retarded.” As little as I care about what Steven Crowder has to say, he is, arguably, a public figure, and he is actively trying to normalize the use of the word. Rachel Jeantel, on the other hand, is the product of that kind of normalization. It is people in positions of influence, like Jon Stewart, Ann Coulter, Rush Limbaugh, Keith Olbermann, President Obama, Rahm Emanuel, Bill Maher, and Sarah Palin, for example, who are in positions to influence young people like Rachel. The point is not to beat up on any of them for using the word (or failing to push back on it), but to try my best to explain that they are hurting people who are asking them, nicely, not to. If it makes Steven Crowder feel like a big man to call Rachel Jeantel “retarded,” that’s his business, but I would simply ask that everyone else ignore him, and try using another word.

Update: Steven Crowder is already trying to lie about what he says in his own video, claiming he only “repeated” what Ms. Jeantel said:

Once again, Steven Crowder is free to say “retarded” if he wants to, but what is the point of being “edgy” if you don’t have the balls to stand by what you actually said? Also, Alec Baldwin, same question. You called a guy a “queen” and said he would enjoy having a foot up his ass. Own it. I don’t care if either of these guys apologize, but at least take responsibility for what you said.