Rick Astley Releases First Single In 17 Years, Thanks To The Internet 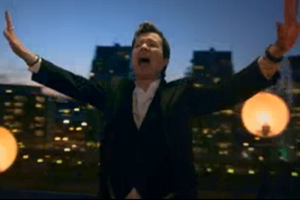 Pretty sure we can call this one a comeback: After 17 years, British one-hit wonder turned unwitting Internet phenom Rick Astley has returned for his sophomore effort. Great to have you back, Rick! We need more gingers in the business. But let’s face it: would any of this be happening without the Rickroll?

I’ll let you evaluate the quality of Astley’s new music yourselves below (personally, I’m a much bigger fan of his more dance-oriented ’80s fare), but there’s a very important media story in the fact that Astley bothered to make a new video at all. Before the “Rickroll” phenomenon happened, Astley had no interest in continuing a music career. For one, he seemed completely confused by the fact that people cared about him at all when Rickrolling went mainstream.

In 2008, Astley said that he was completely perplexed by Rickrolling: “If this had happened around some kind of rock song, with a lyric that really meant something — a Bruce Springsteen, “God bless America” … or an anti-something kind of song, I could kind of understand that. But for something as, and I don’t mean to belittle it, because I still think it’s a great pop song, but it’s a pop song; do you know what I mean? It doesn’t have any kind of weight behind it, as such. But maybe that’s the irony of it.”

And he also said he wouldn’t really consider coming back to music because, well, “it’s almost a young person’s thing, that.” If he had no intention whatsoever of returning to music– and the fact that he was silent for 17 years seems to back that claim up– then started appearing in the Macy’s Thanksgiving Day Parade (by surprise, of course) and slowly embracing a return to the spotlight, it comes to follow that this return would have never happened without the Internet tempting him back.

So, internet: next time you decide to pluck a random ’80s one-hit wonder out of obscurity in the form of obnoxious yet somehow deeply satisfying prank, think it through. You never know what you’ll unleash on the unsuspecting masses. Again.