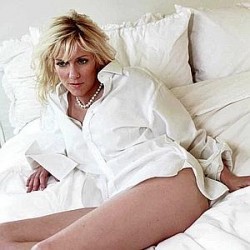 Well, it looks like no matter how much you wish for it the Edwardses and their scandals are not going away (they’re sort of like the Clintons except without the brains and success). Behold the latest installment. Rielle Hunter, former(?) mistress of John Edwards and mother of his daughter Frances (whom he officially admitted paternity of earlier this year), has given an interview to GQ for their upcoming April issue, something she felt comfortable doing now that “Johnny” had gone public. (Had she done it before she would have, um, “emasculated” him). It sort of goes down hill from there.

Interestingly, Hunter says it was Andrew Young’s idea to claim paternity. Alas, according to Hunter, the Dave Matthews anecdote is completely false (“No. We were on the porch, and it was raining. Those are the only facts that are correct about that night in Andrew’s book. It astonishes me. The story is good enough without all the lies.”) From GQ:

In Hunter’s defense(?) she notes that she’s not making a penny from the interview. So there’s that. Also she thinks the fact the National Enquirer may be up for a Pulitzer for their reporting on this entire debacle is a sign that the world is going to hell. Read the whole thing here.