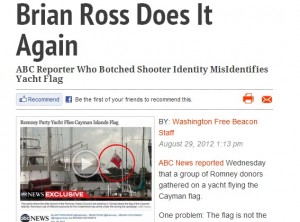 The conservative Washington Free Beacon thinks they have ABC News’ Brian Ross nailed for contributing to a report which says that the Romney Victory Council’s party yacht is flying a Cayman Islands flag, an uncomfortable symbol of Mitt Romney’s secretive finances. According to the Free Beacon, the yacht is actually flying the flag of Bermuda, but it appears their research may have been a tad lazy.

Ross became something of an arch-villain to the right when he jumped the gun and falsely reported that Aurora mass shooter James Holmes was a member of the Tea Party. Sensing payback, conservatives jumped the gun themselves. From The Washington Free Beacon:

ABC News reported Wednesday that a group of Romney donors gathered on a yacht flying the Cayman flag.

Among the three reporters bylined on the story is Brian Ross, who suggested on live television that the James Holmes who murdered a dozen moviegoers in July could be a Tea Party member named Jim Holmes. Ross later apologized.

However, they failed to note that a different version of the Cayman Islands flag, the “Civil Ensign,” features the Union Jack on a field of red: 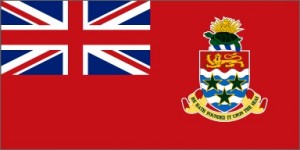 It’s a mistake that anyone could have made, unless they had actually read the ABC News piece they were criticizing, and actually clicked the links provided:

The Cracker Bay is owned by Gary Morse, developer of the Villages retirement community. Companies controlled by Morse gave nearly $1 million to the pro-Romney Restore Our Future superPAC. Registered in the Caymans, and flying a version of the Caymans’ “civil ensign” or merchant flag, the Cracker Bay has an impressive art collection and can seat 30 for dinner.

Either way, though, Romney’s party boat dovetails with his finances. He’s also owner of a shadowy Bermuda corporation. They probably also serve Swiss cheese on the yacht from time to time.

Update: In a series of hilarious updates, presented below in chronological order, the Free Beacon learned that ABC News Knows Their Flags:

UPDATE (1:40 p.m.): Upon further review, there are in fact multiple Cayman Island flags, and it appears that the original report by ABC News’ Brian Ross correctly identified the flag flying on the boat in question. The Washington Free Beacon regrets the error.