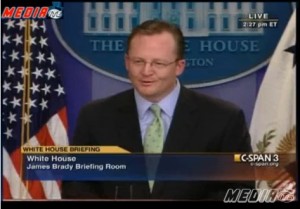 I covered the Freedomworks Tax Day Tea Party last week, and although organizers did an excellent job of keeping out the kind of  offensive behavior that has been highlighted at other such rallies, socialist and communist signs and rhetoric predominated.

At the same time, President Obama was telling a crowd at a fundraiser that the Tea Party ought to be thanking him, an even wider disconnect than a year ago. I asked Robert Gibbs if the White House had any plans to bridge that gap, as I did last year, and his response was similar. While the Tea Party has moved a considerable amount in a year, they don’t appear to have moved the White House at all.

It has gotten to such a point that the prevalence of “NObama the Socialist”-type signs at Thursday’s rally barely registered, and over the weekend, Tom Tancredo followed up his February Tea Party call for voter literacy tests with entreaties to send the President “back to Kenya.”

I have two quick questions on the Tea Party. First of all, I was at the rally last Thursday and there was — socialist rhetoric was predominant. I think somebody sang a song about there being communists in the White House. And yet the President said that the tea partiers ought to be thanking him. I’m wondering if there’s any plan going forward to try and bridge that pretty large disconnect, or is that a lost cause?

MR. GIBBS: Look, the President is — and I think what the President referred to was the notion that in a time of great economic calamity, the President has taken a series of albeit sometimes unpopular but fully warranted activities to ensure that our economy didn’t further collapse, that our financial sector didn’t melt down, and that it didn’t take a greater portion of the economy down with it.

In the meantime, he also cut taxes for 95 percent of working Americans. I think that the President will continue to take the steps that he thinks is necessary to get our economy moving again to put people back to work and to get our fiscal house in order — a lot of which is the concern of those that have protested.

Q And my other question is, given the predominance of this socialist rhetoric — comments like Tom Tancredo’s this weekend; he said something about the President should be sent back to Kenya —

Q My question is —

MR. GIBBS: No, you know what, I could probably fill the better part of my afternoons responding to the general lunacy of somebody like Tom Tancredo. And given the fact that I’ve got a relatively busy schedule and no real desire to do that, I’ll —

The rest of my question was about the way some media outlets are presenting the Tea Party as a mainstream movement, another disconnect that’s only possible by ignoring the dominance of “socialist” demonization, birther rhetoric, and, as Gibbs puts it, “general lunacy” that pervades the Tea Party.

As Chuck Todd noted, it is in the Republicans’ best interests to mainstream the Tea Party, to harness the movement’s energy while trying to filter out the very worst exhaust fumes.