Gibbs Zings Rumsfeld: ‘You Go To War With The Sec. Of Defense You Have’ 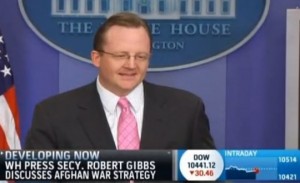 Commanders in Afghanistan repeatedly asked for support to deal with the reemergence of the Taliban, but these reinforcements did not arrive.

In doing so, he set Gibbs up to deliver a nostalgia-inducing punchline.

At issue is whether the President’s line was referring only to 2008 troop requests (as opposed to Rumsfeld’s tenure as Defense Secretary). Not content simply to say “Yes,” Gibbs pointedly asked (3 times) that we let Rumsfeld explain to the American people whether the war in Afghanistan was “appropriately resourced” during his tenure.He also let go of this Rummy zinger, to an unimpressed Tapper.


Transcript of the exchange (via ABC News):

TAPPER: Former Defense Secretary Rumsfeld took issue with a lot of the speech last night, and I just wanted to clarify it. The president said commanders in Afghanistan repeatedly asked for support to deal with the reemergence of the Taliban, but these reinforcements did not arrive. I assume you’re referring to the McKiernan requests throughout 2008.

GIBBS: Well, I — that’s, I believe, what the speech — the line of the speech. I will let Secretary Rumsfeld explain to you and to others whether he thinks that the effort in Afghanistan was sufficiently resourced during his tenure as secretary of defense.

GIBBS: I — I think that’s — that’s something that, you know…

TAPPER: … he said he’s not aware of a single request of that nature between 2001 and 2006 when he was secretary of defense.

GIBBS: I — again, I’ll let him explain to the American public whether he believes that the effort in Afghanistan during 2001 to 2006 was appropriately resourced. You know, you go to war with the secretary of defense you have, Jake.

TAPPER: That’s cute. The — the question, though, is what specifically was President Obama talking about when he said that?

GIBBS: Again, what President Obama was talking about were additional resource requests that came in during 2008, which we’ve discussed in here. But Jake, again, I’ll leave it to the secretary of defense in 2001 to 2006 to discuss the level of resourcing for that — understanding the level of commitment that we already had dedicated in Iraq, and whether or not he feels sufficient that history will judge the resourcing decisions that he made during that time period in the war in Afghanistan were or were not sufficient.

TAPPER: OK. And some progressive Democrats on the Hill have said today that they think that the president should pursue a war authorization for the surge of troops. Are you guys thinking about doing that at all or…

GIBBS: No, I think the president…

TAPPER: …do you think the 2001 authorization…

GIBBS: Yes, I think the president made very clear last evening that — why we are there now. The conditions for what happened on September 11th brought our forces, through an almost unanimous vote of Congress, to Afghanistan. And obviously that is inordinately — it’s plenty sufficient for what the president is talking about.

GIBBS: Well, I believe in — I believe in the context of the three pillars that he saw, mentioning the basic recognition of human rights in Afghanistan is obviously important to what is happening there.

TAPPER: But he didn’t mention women and girls, and is that…

GIBBS: Again, I think the umbrella of basic human rights was — was the same thing.

TAPPER: So even though he mentioned it in March and he didn’t mention it last night, we’re not supposed to read anything into that at all?

GIBBS: I wouldn’t. I mean, I have not looked exactly at the word phrasing of each speech, but the umbrella of basic — recognizing the basic human rights of everybody in Afghanistan would include that, yes.