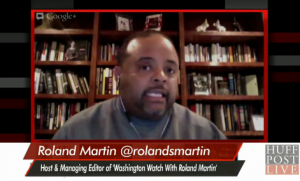 CNN contributor Roland Martin is on the way out from the cable news network, and he is already comfortable opening up about the executive decisions at the network. During an appearance this Thursday on HuffPostLive, Martin criticized CNN executives, whom he described as “largely white male,” for not being comfortable with the idea of “having strong, confident minorities” in more prominent positions on the network.

RELATED: Roland Martin Out At CNN, Explains To Twitter That Network’s ‘New Boss Wants His Own Peeps’

Martin opened up to Marc Lamont Hill about his role with the network, saying that he has a show that regularly gets more impressive ratings than some of the cable network’s own shows, but explained why someone like him could not advance that far in an environment like CNN.

“There’s still this fear, there’s this fear of actually making a leap… you have largely white male executives, okay, who are not necessarily enamored with the idea of having strong, confident minorities who say, ‘I can do this’… We deliver, but we never get the big piece, the larger salary, to be able to grow from there.”

Hill asked Martin if he thinks CNN “didn’t have a place for a real black man in America.” Martin pointed out that CNN has not had a prominent black anchor in years, asking how he never got his own show despite proving he could pull good ratings.

Watch the video below, courtesy of HuffPost Live: