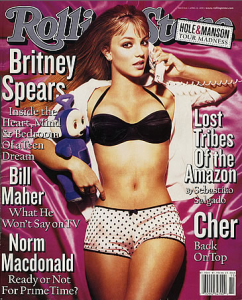 There was a lot of confusion from the punditocracy on Tuesday when news broke that Rolling Stone had a blockbuster story on General Stanley McChrystal that went on to shake the administration, it’s mission in Afghanistan and result in the sacking of a former Time Person-of-the-Year nominee four-star general. The punditocracy collectively popped its eyes, dropped its mouth and gasped, “Rolling STONE?!?” I singularly popped my own eyes, dropped my own mouth, and gasped, “Where have you people BEEN?!?”

Let’s go back to those lyrics. Why? Because they have NOTHING TO DO WITH THE McCHRYSTAL STORY. Everyone treating Rolling Stone like some sort of anomoly — like some kid who stumbled onto a super-big story with just a flipcam and a dream — is on the kind of drugs most of the Rolling Stone‘s cover subjects may enjoy recreationally. The truth is, Rolling Stone has a long and consistent history of this kind of reporting. Full stop. So does author Michael Hastings, who was Newsweek‘s youngest war correspondent when he shipped out to Baghdad for the first time at age 25. He’s now 30. Written plenty. Point being, Rolling Stone was actually not like a rolling stone per those lyrics.

From my piece yesterday on AOL:

In fact, a quick search through the National Magazine Awards database confirms that Rolling Stone has won the coveted Ellie — sometimes multiple coveted Ellies — with stunning regularity over the past decade. It only missed being nominated in two of the 11 years from 2000 to 2010, with 16 nominations and seven wins in total. Five were for political or war reporting. Three were for General Excellence, with a win in that category in 2007.

While it’s true that it’s not as well-read inside teenager bedrooms these days, and yes, their Internet strategy on this sucked majorly, but still — it’s bizarre that the magazine that boasted both Obama and McCain covers during the campaign, won awards for political reporting and then went on to regularly eviscerate Goldman Sachs would raise eyebrows in this way. Yes. We get it. It’s about music. But surely we’ve all been around long enough to know that it has other stuff, too.

I get backup on this from both Brian Williams (Tuesday) and Howie Kurtz (today) so enough from me. Jann Wenner, take a bow. Videos below.

Why Is Anyone Surprised by Rolling Stone’s Scoop? [AOL News]