Romney’s Not Wrong on Obama’s Mishandling of Foreign Affairs, But He’s Not Right Either

Romney’s Not Wrong on Obama’s Mishandling of Foreign Affairs, But He’s Not Right Either

Rothman: Romney Not Wrong on Obama Foreign Policy; But Not Right Either 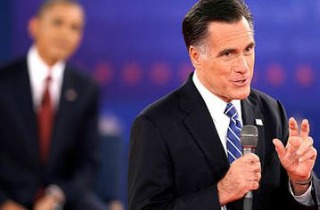 Once christened the Republican Party’s alternative to President Barack Obama, former Massachusetts Gov. Mitt Romney maintains the authority associated with being anointed the central opponent to the commander-in-chief. On Tuesday, Romney marshalled every ounce of that authority when he mounted a multi-pronged attack on the president’s handling of America’s foreign affairs.

On issues ranging from Obama’s failure to achieve a status of forces agreement with Iraq and Afghanistan, to Iran’s race toward nuclearization, to North Korea’s continued destabilization of Northeast Asia, to blinking when military action was called for in Syria, to the escalating crisis in Eastern Europe, Romney condemned the president for failing to act “when action was possible.”

Today, Romney asserts, America has few options at its disposal to safeguard the interests of the United States in any of these hot-spots. Romney is correct to observe that these are the results of a cascading failure of American leadership. Many of them originate from a worldview popular with the president and his advisors that undervalues the potential for American soft and hard power to effect positive change in the international environment. But just because Romney is correct does not mean he is right.

RELATED: Romney: World in Crisis Because Obama ‘Failed to Act When Action was Possible’

The president’s defenders have feebly attempted to rebut the former GOP nominee’s criticism by asserting that Romney has not posited any solution to the myriad crises America faces overseas. They seem to be intentionally missing the fact that Romney’s central assertion is that the time for preemptive action has long passed and the United States is today focused entirely on damage mitigation. But there is some value to their criticism of Romney: the world is entering a crisis the likes of which have not been seen for nearly a century, and it demands criticism be constructive rather than purely partisan.

The risk of great power conflict in Europe has not been this potent since Soviet hardliners orchestrated the failed 1991 coup in a misguided effort to maintain the territorial integrity of the Soviet Union. At the barrel of a gun, the Crimea has been annexed by the Kremlin. Tens of thousands of Russian troops and hundreds of machines of war stand ready at Ukraine’s borders to execute the second phase of Moscow’s plan for territorial expansionism. A revanchist nation, addressing what it perceives to be historic grievances, has unilaterally redrawn the borders of Europe – an eerie maneuver reminiscent of Hitler’s Germany.

If this language sounds severe to you, it should. The gravity of the present crisis should not be downplayed.

Because the present crisis is so grave, Americans must stand united behind its elected leaders and urge them to pursue a productive course of action that has the greatest potential to prevent this crisis from worsening. American conservatives have noted that the Washington and Brussels have adopted a weak set of sanctions aimed at Russian individuals as some sort of a post-hoc deterrent. They are correct to criticize a move which was so feeble that the Russian stock market rallied on the news. But conservatives would do well to praise the actions of the White House and the West which are, or will be, effective; ejecting Moscow from the G-8 and sending the vice president, and a dozen F-16 fighter jets, to the NATO member states that border the former Soviet Union are among them.

Conservatives in America are gearing up for the 2016 presidential election in which they appear likely to face former Secretary of State Hillary Clinton. Nothing should make conservatives more protective of their decades-old political foe than Russian propagandists taking equal aim at her as they are Republican hawks. On the English-language propaganda network RT, the American Quislings who populate that network and its online presence with content have attacked her and her husband ruthlessly as “radicals,” “neo-cons,” and supporters of “fascism” in Kiev.

The Russian propagandists make no distinction between right and left in America. They are all and only the enemy. Americans should be clear-eyed as they face this great challenge: there is only one American president and it is he alone who will have to address this emergency.

It is not wrong to criticize the president, even at a time of international crisis. Indeed, America’s tradition of political dissent allows for that kind of criticism, especially in times when the government is predisposed to exert greater control over what it might deem dangerous speech. But that criticism should be as constructive as possible. Russia must be confronted with a united front in the West. It should be a priority for all Americans to avoid giving Russia’s propagandists ammunition to attack the president and expose the appearance of disunion in the West. I fear that Romney has done just this with his latest criticism of Obama.