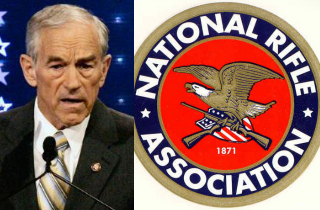 Joining other high-profile libertarians who were baffled and put off by the National Rifle Association CEO Wayne LaPierre‘s insistence on defending the Second Amendment by attacking the First Amendment, and by his proposal to put armed guards in all schools, retiring Rep. Ron Paul (R-TX) has officially come out against the NRA’s statements, slamming the lobbying organization’s proposals by saying that “government security is just another kind of violence.”

“Do we really want to live in a world of police checkpoints, surveillance cameras, metal detectors, X-ray scanners, and warrantless physical searches?” Paul wrote on his website this morning.

He went on to liken the NRA’s proposal for armed guards in every public school to much-maligned government security programs like the Transportation Security Administration:

“We see this culture in our airports: witness the shabby spectacle of once proud, happy Americans shuffling through long lines while uniformed TSA agents bark orders. This is the world of government provided ‘security,’ a world far too many Americans now seem to accepts or even endorse. School shootings, no matter how horrific, do not justify creating an Orwellian surveillance state in America.”

Of course, this does not mean that Rep. Paul agrees with his liberal colleagues that more gun control legislation is the solution to gun violence: “Predictably, the political left responded to the tragedy with emotional calls for increased gun control,” he wrote. “This is understandable but misguided. The impulse to have government ‘do something’ to protect us in the wake of national tragedies is reflexive and often well intentioned. Many Americans believe that if we simply pass the right laws, future horrors like the Sandy Hook Elementary shooting can be prevented. But this impulse ignores the self evident truth that criminals don’t obey laws.”

But Paul, ever true to his reputation as a lone dissenter in Congress, took some pretty pointed shots at his own Republican colleagues for embracing the NRA’s proposals:

“The political right, unfortunately, has fallen into the same trap in its calls for quick legislative solutions to gun violence. If only we put armed police or armed teachers in schools, we’re told, would-be school shooters will be dissuaded or stopped. While I certainly agree that more guns equals less crime and that private gun ownership prevents many shootings, I don’t agree that conservatives and libertarians should view government legislation, especially at the federal level, as the solution to violence.”

He concluded: “Our freedoms as Americans preceded gun control laws, the TSA, or the Department of Homeland Security. Freedom is defined by the ability of citizens to live without government interference, not by safety. It is easy to clamor for government security when terrible things happen; but liberty is given true meaning when we support it without exception, and we will be safer for it.”