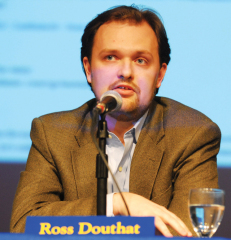 In his op-ed for the New York Times today, right-of-center columnist Ross Douthat criticized the “Pledge to America,” saying that “House Republicans have adopted the atmospherics of the Tea Party Movement, but they’ve evaded its most admirable substance.”

He characterized the Tea Party as a means of holding both Democrats and Republicans accountable:

The Tea Party is a grass-roots movement — wild, woolly and chaotic — which sometimes makes it hard to figure out exactly what it stands for. But to the extent that the movement boasts a single animating idea, it’s the conviction that the Republicans as much as the Democrats have been an accessory to the growth of spending and deficits, and that the Republican establishment needs to be punished for straying from fiscal rectitude.

Douthat further revealed his skepticism with the new GOP manifesto, saying that its bold claims are weakened by a lack of specificity:

The pledge is ultimately less about the triumph of the Tea Partiers, and more about their potential co-option by Republican politics as usual. … That would be unfortunate. Their eccentric elements notwithstanding, the Tea Parties have something vital to offer the country… But it’s all too easy to imagine the movement (which, after all, includes a lot of Social Security and Medicare recipients!) being seduced with rhetorical nods to the Constitution, and general promises of spending discipline that never get specific.

The interweaving and evolving relationship between the GOP and the grass-roots Tea Party movement is an ongoing narrative with huge implications for not just the midterm elections, but the 2012 presidential election as well. The fact that Douthat – a well-considered thought leader in the conservative movement – continues to draw the distinction between Tea Party and GOP means that there is likely far more drama left to watch.