Ross Perot Not Endorsing Anyone: ‘We’re On The Edge Of A Cliff’ But ‘Nobody Talks About It’ 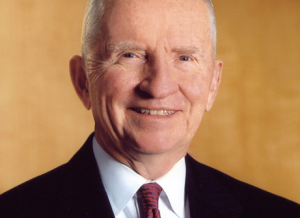 If you’re uninspired by the upcoming election, you’re in the company of former presidential candidate Ross Perot, who declined to endorse a contender even though his family has a history of supporting members of the GOP.

“We’re on the edge of the cliff, and we have got to start fixing it now. Otherwise, we’re leaving a disaster to our children’s and our grandchildren’s future,” the billionaire and data-processing company founder told USA Today. “Nobody that’s running really talks about it, about what we have to do and why we have to do it. They would prefer not to have it discussed…The last thing I ever want to see is our country taken over because we’re so financially weak, we can’t do anything.”

Perot, who criticized John McCain and pushed for current GOP pres. candidate Mitt Romney in 2008, says he doesn’t have it in him to champion presidential candidates anymore: “I’m too old to do it now.” Things were easier during the Clinton administration. The former Independent candidate continued:

He said about as much around the 2008 election cycle:

“The situation in 1992 was not nearly as bad as it is now,” he says. “If ever there was a time when it was necessary to put our house in order, it’s now. It’s like having cancer and being in denial. The conduct of the House and Senate is an embarrassment to the nation.”

So what about implementing a third party challenger? Perot isn’t confident our country could actually follow through with this:

“It’s almost impossible to do it. It would be a very healthy thing if you could get it done and make it happen, but it’s very difficult to do, and very few people would want to try. … They know they’re going to be butchered from day one for what they’ve done, and much of the media will participate actively in that.”

How’s that for bleak? Read the full article here.