Rupert Murdoch To Maxine Waters: ‘We Are Not Anti-Immigrant at Fox News’ 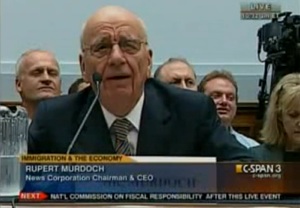 News Corp. Chairman Rupert Murdoch got into a bit of a row today with Rep. Maxine Waters (D-CA). Murdoch was providing testimony over the need to ease immigration laws allowing skilled laborers in the U.S., but was confronted by Waters over what she thought to be unfair treatment of immigrants. Murdoch held his own, firing back “we are not anti-immigratnt at Fox News.” And that was just the beginning of what was a feisty exchange.

Murdoch was in D.C. alongside New York City Mayor Michael Bloomberg, who has formed a coalition of CEOs (which includes many titans of the media industry) via his Partnership for a New American Economy meant to help the plight of skilled laborers from outside of the U.S.

Maxine Waters got it started by reminding Mr. Murdoch about his ability to “frame issues” and “disseminate a lot of information” via his numerous media outlets, but seemed particularly vexed by Fox News. Waters went right to it, asking Mr. Murdoch”

“Why are you here with a basically a decent proposal taking about the advantage immigrants to our economy but I don’t see that being promoted on Fox. As a matter of fact, I’m often times stunned by what I hear on Fox, particularly when you have hosts talking about “Anchor Babies” and all of that. Explain to me, whats the difference in your being here and and what you do not do with your media networks?”

After adjusting a minor microphone reply, Murdoch replied “we handle all views on Fox. If you wish to come on and state these views we’d love to have you on Fox News,” to which Waters immediately declined.

After Bloomberg interceded on behalf of Murdoch, Waters got right back into the fray, reestablishing her point about the seeming contradiction between Murdoch’s “pro-immigrant” testimony, and what Waters saw as a very different point-of-view on Fox News. Murdoch seemed somewhat taken aback by the aggressive questioning — or perhaps he’s lost a intellectual step in his later years — but his best response was to say that he employs a number of immigrants at Fox. “We do not take a consistent anti-immigrant’ line.