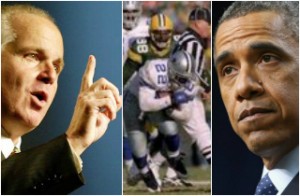 NFL owners voted Wednesday to create a rule barring running backs for leading with the crown of their helmets into a defender when encountering contact in the open field.

Rush Limbaugh is none too pleased.

“Folks, you better have tapes of the way football used to be played!” Limbaugh warned his radio audience. He then went on to partially blame the “liberal sports media” for pressuring owners into passing the rule.

Regardless of your opinion of Rush, give him this: His guiding principles are consistent, regardless of topic. From a specific political perspective, Rush has always been a Reaganite (anyone who refers to the 40th President as Ronaldus Maximus must be a fan). And Reganites enjoy repeating several of his mantras, including “Government is not the solution to our problem; government is the problem.”

So when it comes to the country’s most successful, most profitable league attempting to police the game and its players at unprecedented levels, Rush sees NFL Commissioner (Roger Goodell) not as another coming of the Gipper, but another version of President Obama. In his eyes, the NFL’s culture is now going in the same direction as the country: Bigger government, imperial leadership, all while asserting more control over its citizens (players).

Owners say the running back helmet rule is designed to make the league safer (despite many current and Hall of Fame running backs strongly disagreeing with the rule). The change is in the same spirit as other player-protection rules introduced under Goodell: No blows to the head of the quarterback, no hitting a “defenseless” receiver, no horse-collaring (pulling a player down by the back of the shoulder pads).

Rush argues that Goodell is overstepping his bounds in changing the fundamental culture of the sport. He does so with the same passion he applies to Mr. Obama for fundamentally changing the country. Here’s one parallel the broadcaster draws between the new helmet rule and the Affordable Care Act, more commonly known as Obamacare:

“(Emmitt Smith) says it sounds like the rule has been made up by people who’ve never played the game of football. Just like it sounds like health care has been taken over in this country by people who have never had any experience in that business at all. It’s the same thing, folks. If you think it’s probably the best thing for the government to run health care, realize this, from Obama on down, there isn’t anybody, outside of maybe a couple of doctors that are in Congress, that have the slightest idea what they’re doing. They’ve never run insurance companies. They’ve never run hospitals. They don’t know the first thing about insurance, medicine, treatment, any of the sort.
All they know is power. All they know is arrogance. They think they know how to do everything better than everybody else. They have contempt for average people. ‘You don’t know how to run your own life. You don’t know how to make the decisions to live a normal life. You’re just incompetent,’ and here Emmitt Smith is basically saying it’s as if people that never played the game are making this rule.”

The so-called Nanny State of the NFL was also on display during the whole Bounty-Gate scandal that involved the New Orleans Saints. To review quickly, some Saints players and coaches were accused by the league of specifically targeting opposing players under “cash-for-hits” verbal pacts. As a result, Goodell—without a jury, per se—unilaterally punished several players and coaches with fines (including head coach Sean Payton) and even suspended a few for the season. The decision was later vacated, but only after most of the suspensions were served.

At the time, Rush (like many others) opposed Goodell acting as judge and jury (as he did with the President on his drone policy), all while stating that ferocity is what helps make the NFL easily the most popular of any of the professional sports leagues. Any change to the game, Limbaugh argues, comes from a liberal mindset:

“’This is not who we are as a culture,’ they (liberals) will say. No matter if the players want to take the risks and play, it won’t matter. They don’t know what they’re doing, just like you and I don’t. We don’t know what’s good for us. They don’t, either. Liberal command-and-controllers know what’s good for everybody. Like the mayor of New York: You can’t eat trans-fat. You can’t drink sodas bigger than 16 ounces. Well, pretty soon it’s gonna be easy to say it’s stupid to play this game. You’re putting your life at risk, and we’re not gonna allow it anymore.”

Limbaugh is obviously a polarizing figure. No other media figure can induce the kind of vitriol he can simply by even the mention of his name. He currently averages 14-25 million listeners (according to the Washington Post), and signed an 8-year, $400 million contract last year. That’s $50 million a year performing on a medium many have already declared a dinosaur.

So what makes the 62-year-old so popular to earn that kind of paycheck?

It’s that creative ability to take any topic—even a rule change in the NFL that no conservative cable opinion program would barely touch—and turn it into a attack on the President, an indictment on liberals, or usually both. But this isn’t about ideology, it’s about knowing how to connect with an audience 15 hours a week…without a single guest.

Is it a stretch?

A rhetorical bridge too far?

For most to attempt, yes.

But somehow, regardless of whether you agree with him or not, Limbaugh knows how to pull it off.