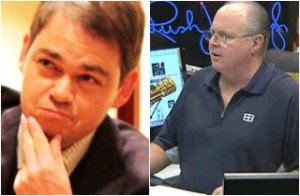 When Rush Limbaugh apologizes for wrongfully calling Mediaite‘s Tommy Christopher “brain dead” on his radio show Tuesday afternoon, it will be a historic second apology for the right-wing radio giant, and only the fourth such apology he has issued. Reacting to Christopher’s earlier report on Chief Justice John Roberts‘ comparison of gay marriage rights with state-enforced childhood friendship, Limbaugh lashed out at the openly-liberal commentator by citing the precedent established in the Supreme Court’s landmark 1968 I Know You Are v. What Am I decision.

Limbaugh began by printing out a copy of Christopher’s article, then read aloud from it. in case you missed it, here’s what Roberts said:

In one of the early pieces of sound to emerge from oral arguments, which analysts pore over for clues as to a judge’s leanings, Roberts made a particularly brain-dead comparison that might portend disappointment for his cousin. “If you tell a child that somebody has to be their friend,” Roberts said, “I suppose you can force the child to say ‘this is my friend.’ but it changes the definition of what it means to be a friend. And that’s, it seems to me, what (supporters?) of Proposition 8 are saying here. All you’re interested in is the label, and you insist on changing the definition of the label.”

Christopher went on to explain that the comparison was flawed because “as is usually the case with conservative views on civil right’s, Roberts has it exactly backwards. In Roberts’ simplistic analogy, the child isn’t being forced to call anyone his friend, he is being permitted to call someone a friend. Others may continue to argue, and believe, that they’re not friends, but the law ought to allow the child to call his friend a ‘friend,’ and the government ought to recognize that friendship, just as surely as it ought not dissolve anyone else’s friendship.”

Limbaugh offered his own interpretation. “What Roberts is saying, matrriage is a man and a woman, it’s what it’s always been what the word means. Now, you want the label to mean something new, so you might as well tell kids that they have to start telling everybody that they’re their friend. I know exactly what he’s talking about. He’s, he’s, he’s simply saying marriage is what it is, if you go to the dictionary, marriage has a specific definition. Now, if you’re coming here and saying that you want to change that definition, then you are essentially just telling everybody that they must accept everybody as their friend, or as they want to be accepted, and that definitions don’t mean anything.”

“And the media,” Limbaugh continued, “Tommy Christopher is the Mediaite reporter, refers to that as ‘brain-dead,’ and I think that’s classic, that perfectly illustrates where we are, we have a low-information reporter here, who doesn’t care what the definition of a word is, who doesn’t care what the meaning of it is, all that matters to this brain-dead reporter is that the Chief Justice doesn’t see the world the way he does, therefore, the Chief Justice is brain-dead.”

Mr. Christopher delivered a lengthy (possibly drunken?) response, which I have excerpted below:

First of all, I’d like to thank Rush for being such a loyal reader, albeit a consistently careless one. I didn’t say the Chief Justice was brain-dead, I said his comparison was brain-dead, and not on the basis of the definitional argument that Limbaugh focuses on, but because Roberts asserts that marriage equality “forces” that definition on the unwilling. It does not. Legal recognition of same-sex marriage will not force Rush Limbaugh to call any man his husband, or to call any other man’s husband a “husband,” all it will do is prevent the government from forcing gay people not to call their spouses “husbands” or “wives,” or to call their marriages something else. It also removes the government’s ability to deny them the legal rights that they’re entitled to.

The reason  I didn’t focus on the “dictionary” argument is that it’s even more brain-dead than the one I engaged, and an even more brain-dead argument for Rush Limbaugh to make. First of all, the definition of marriage has changed many times, and now includes once-unlawful unions like Limbaugh’s second-through-fourth marriages, and that of President Barack Obama‘s parents. The presidential nominee whom Limbaugh supported in the last election is the product of ancestors whose marriages have fallen out of the definition of marriage that Limbaugh currently espouses.