Rush Limbaugh Recounts ‘The True Story Of Thanksgiving, Or, How Socialism Almost Killed The Pilgrims’ 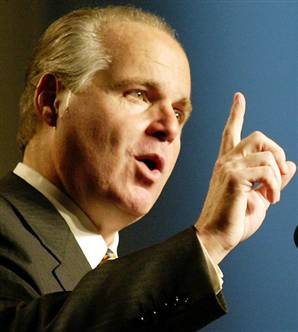 “Time for the traditional, true story of Thanksgiving,” Rush Limbaugh announced. “Written by me!”

Limbaugh recounted the story of religious separatists who journeyed to the New World in search of the freedom to worship as they saw fit without fear of persecution. They faced many challenges and hardships in their new home, but eventually benefited from agricultural practices shared by local Indians.

“And this is important to understand,” Limbaugh then cautioned, “because this is where modern American history lessons often end.”

Here’s the part that’s been omitted: The original contract the Pilgrims had entered into with their merchant sponsors in London called for everything they produced to go into a common store, and each member of the community was entitled to one common share. All of the land that they cleared and the houses they built belonged to the community as well. Now, they were going to distribute it equally; all the land they cleared, all the houses they built belonged to the community. Nobody owned anything. They just had a share in it. It was a commune.

But this form of collectivism would prove costly and unproductive, and so each family was then given its very own plot of land “to work and manage, thus turning lose the power of the marketplace.” Socialism had nearly killed the Pilgrims, because the most creative and intelligent were not given any real incentive to work longer, better or faster.

This year, give thanks for capitalism. And the invention of effective deodorant. But don’t you think for one moment that the Indians played a major role in the Pilgrim’s success — that’s just a ploy to promote diversity and underplay the role scripture and the free market played in the first Thanksgiving.

Somewhere, a kindergarten child donning a feathered headdress for his school’s annual Thanksgiving play is looking towards the horizon, shedding a single tear.

Have a look, via Limbaugh’s radio program: