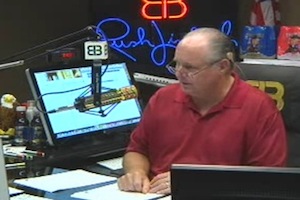 Rush Limbaugh admits that it’s hot outside but reminds his listeners that it’s summertime, you know, the time of year when nobody should be shocked you need to wear shorts and t-shirts. Yet Rush is annoyed that many in the media continue to talk about “record” heat waves across the country, which according to Rush, is simply not true.

If the high temperatures of this summer were occurring in February, then Rush would be impressed. However, “there wasn’t one record set last week” and this “heat index” indicator that is frequently cited in news reports is an “official nothing” and isn’t a “real temperature.” Instead, news reports cite the meaningless heat index “because it was crisis, because it got everybody all frightened, it was news coverage, it was something new, it was something to get people captivated and control them.”

Rush played several comments from MSNBC’s Ed Schultz, Michael Smerconish and Al Sharpton all attacking Rush for suspecting reports of the heat wave may be some type of conspiracy. Yet, Rush refusing to back down, claimed he was the only one in “realville” looking at the historical facts. Although alleging people will be controlled through reports on the weather doesn’t seem too “real,” Rush did return to reality to find some amusement in hearing Sharpton now sound just like everyone else on MSNBC. Rush concludes Sharpton now just reads off a script about topics in which he’s not really interested.