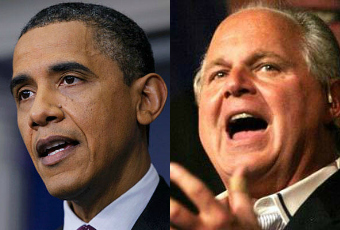 On his syndicated radio show Monday afternoon, conservative firebrand Rush Limbaugh went off on President Barack Obama for his recent comments on successful businesses, claiming that the president “hates this country.”

Limbaugh discussed the president’s recent suggestion successful businesses would not exist without government investments in education, infrastructure and law enforcement. He quoted President Obama’s Friday address to supporters in Virginia: “If you’ve been successful, you didn’t get there on your own.”

“There’s no other way to explain this,” he continued. “He was indoctrinated as a child. His father was a communist. His mother was a leftist. He was sent to prep and Ivy League schools where his contempt for the country was reinforced.”

This claim echoes similar sentiments expressed by conservatives like Glenn Beck, who has suggested the president is a Marxist with contempt for capitalism; and author Dinesh D’Souza who argues that the president inherited anti-colonial “rage” from his father.

“This is what we have as a president. A radical ideologue, a ruthless politician who despises the country and the way it was founded and the way in which it became great,” Limbaugh concluded. “He hates it.”

Check out the audio below, via Daily Rushbo: