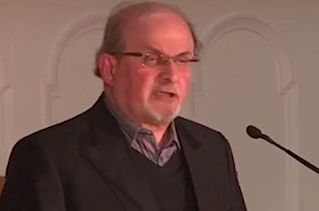 The University of Vermont in Burlington invited Salman Rushdie to speak on campus Wednesday night, giving The Satanic Verses

author a chance to deliver his most comprehensive response yet to the terrorist attack that targeting French satirical magazine Charlie Hebdo. Rushdie used the opportunity to defend free speech as an absolute right that cannot be diminished just because you happen to disagree with what someone is trying to say.

Rushdie said Charlie Hebdo and its cartoonists were “beloved” in France for the willingness to make fun of anyone and everyone. “The thing that I really resent is the way in which these, our dead comrades… who died using the same implement that I use, which is a pen or pencil, have been almost immediately vilified and called racists and I don’t know what else,” he said.

Watch a clip of the speech below, via AP: