Santa Claus Vs. The H1N1 Virus: The New War On Christmas?
video

Santa Claus Vs. The H1N1 Virus: The New War On Christmas? 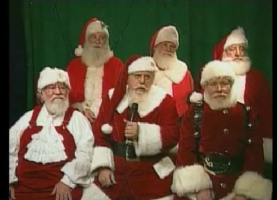 ‘Tis the season for trend stories, and Santa‘s struggle against H1N1 could be the gift that keeps giving for local news channels. Some mall Santas’ unions have asked that their members be put on the federal government priority list for swine flu vaccine thanks to their frequent contact with children, but it hasn’t happened yet. As one Wisconsin channel put it, “as opposed to coming down the chimney flue, it’s coming down with swine flu.”

While the local news channels really ran with the Santa-versus-H1N1 story, MSNBC got in on the action as well. As a serious national cable channel, MSNBC was able to contribute the perspective that some of the fly-by-night local programs lacked: for instance, pointing out that not only contact with sniffling children, but “obesity” and age could make Santas especially at risk to contract swine flu. To illustrate this point, go to the 0:55 mark of the clip below, where you will see a Santa munching on a donut.

E Long Fong I Song, aka “ELFIS,” made this impassioned plea in song for an FDA-approved H1N1 vaccine; he added that Tamiflu and Relenza wouldn’t do. Note: ELFIS is an elf and not a Santa.

And then, of course, the local programs:

Norfolk, North Carolina’s WAVY hit the local mall and discovered hand sanitizers and CDC-approved cleaning products in the line for the Snow Globe. The times, they are a changin’.

Wisconsin’s WISN made use of the frightening ‘needle dipping in a vaccine bottle’ footage, at 0:50 in the video below:

Rather than just referring on vague “groups,” Austin News KXAN pointed out that the Amalgamated Order of Real Bearded Santas supported the push. They also noted that you should “not mess with that group.”

While most of the mall Santas interviewed by the local news channels mentioned extra health precautions, like hand sanitizer, on the whole they didn’t seem to be clamoring for the vaccine. As easy as it is to poke fun at local news reporting (hey, look!), taken together, it can provide relevant information at the ground level. Trips to the local mall: journalism AND an excuse to go to Bath & Bodyworks!