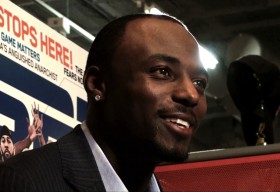 The “athletes being bad” story du jour is a report that Santonio Holmes, troubled receiver for the New York Jets, was escorted off of a flight from Newark to Pittsburgh by police.

Numerous outlets are saying that Holmes was asked to turn off his iPod at the end of the flight, failed to do so, and was then “forcefully removed” by police.

According to the Allegheny Police Department, however, that’s not entirely accurate.

Mediaite spoke with the Senior Director for Media Relations of the New York Jets, Bruce Speight, and here’s what he told us:

The Allegheny Police filed a report stating that New York Jets receiver Holmes “failed to turn off his iPod at the appropriate time” when his flight landed in Pittsburgh International Airport on Thursday night. That part of the story is consistent with most accounts in the media.

However, Speight wanted to stress that Holmes was not “escorted” off of the plane by police, as some outlets are reporting. He forwarded us an email that he received from the police that said, “Santanio Holmes was NOT removed from any airplane (4/29/2010). He was asked to remove his Ipod (at one point), in which he complied. There’s no further information to report.”

It’s important to note that Speight gave this information to reporters before a press conference, held today, regarding the incident on the flight. Considering that this information was made readily available, why were most outlets reporting that Holmes was “forcefully removed” by police?

The answer lies in the player’s history and in the nature of internet reporting. Holmes, who was recently traded to the Jets from the Pittsburgh Steelers, has what some sports pundits call a “troubled past.” For those not versed in sports pundits-speak this means that he has been “arrested multiple times.”

Regarding today’s reproduction of misinformation, it’s entirely likely that one outlet misreported part of the story. Other writers and bloggers, seeing that Holmes screwed up again and eager to jump on it, reprinted details that the New York Jets and Allegheny Police Department maintain are inaccurate.

While everyone agrees that Holmes has done some very dumb things, this is an example of something dumb being done to him.

Still, the message that NFL analysts will broadcast to America will likely be rooted in misinformation. They’ll say that he was removed from the flight by cops mere weeks after coming to New York and promising a “fresh start.”

At some point, these same analysts will correct themselves regarding the way in which Holmes got off of that flight. By then it might not matter. The story will have written itself.