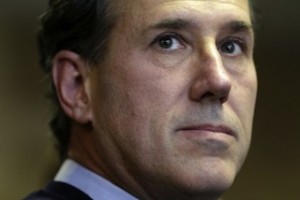 Sunday evening, GOP hopeful Rick Santorum had a bit of a heated exchange when a radio host connected Santorum’s pornography remarks to Joe Paterno, the football coach in the center of the recent Penn State controversy. Decrying the nature of a question, Santorum refused to answer it.

In a short interview with Santorum (who is a Penn State alumnus), Chicago-based radio host Bruce DuMont asked about the candidate’s remarks that President Obama favors pornographers “over children and families.” Santorum doubled down and said, “The Bush administration had a very active program of going after folks who were purveying pornography to children, and this administration has halted most of those prosecutions.”

DuMont then went one step further, “If we were to replace ‘Barack Obama’ with the name ‘Joe Paterno,’ could we say that Joe Paterno seemed to be favoring a child rapist over the Penn State football program?”

Santorum responded, “That’s sort of an insulting question. It’s a ridiculous question, Sir, and I’m not going to answer it. You’re welcome to ask a question. That doesn’t mean I’m going to answer absurd questions.”

Nonetheless, DuMont pressed further, questioning Santorum’s “consistency” on the issue, asking what grade he would give the Catholic Church on “aggressively pursuing child abuse within the church?”

Santorum insisted it’s not his place to assess the issue: “My job is not to grade the Catholic Church — it’s to talk about what I’d do as president of the United States.”