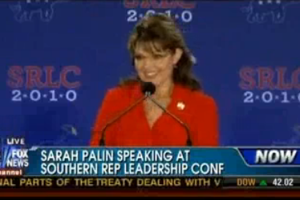 Sarah Palin continues to hold this week’s news cycle hostage, giving what sounded suspiciously like a campaign speech to a crowd at the Southern Republican Leadership Conference in New Orleans. Dressed in her signature red blazer, Palin evoked the “people’s movement” in a speech that was a minefield of Bushisms, Bill Clinton impersonations, a shoutout to Jonah Goldberg, and her most biting attacks on Barack Obama yet.

There is a lot going on in this speech , which is to be expected the week after she waged war on LL Cool J and unofficially declared her intentions to run for the 2012 GOP nomination alongside Minnesota Congresswoman Michele Bachmann (her official statement to Sean Hannity was “that sounds kinda cool”). Here’s all you need to know to wade through the upcoming primetime media firestorm:

In the middle of her explanation of how big government develops, she concludes, in a manner that can only be described as campaign-y, that “government overreach did not begin with the Obama administration, but it will end with the Obama administration.” The goal of this speech was two-fold: to announce the arrival of presidential candidate Sarah Palin to the Republican Party and to intimidate Barack Obama into taking her seriously. She passed at least one of these tests today with flying colors.

Watch her speech below: