Sarah Palin Has A Solution For The BP Oil Crisis: No More Foreigners 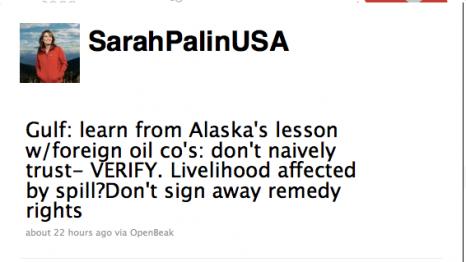 Sarah Palin departed from her preferred platform of communication yesterday to weigh in on Twitter about the Louisiana oil crisis. The woman who coined the phrase drill baby drill (and stands by it, by the way) has somehow managed, in less than 140 characters, to connect the nation’s current furor over illegal immigration with the oil spill. That is some wordsmithing. Of course, here’s what the 140 characters did not leave room for mention. One, even though BP is British in name (British Petroleum) it is not exactly foreign. This from HuffPo’s Jason Linkins:

Of course, while it’s based in Britain, BP is a massive, publicly-traded, multinational energy conglomerate, commonly referred to as a “supermajor”. It’s just one of three companies that are heavily involved with the Deepwater Horizon facility. The other two are Halliburton, an American company, and TransOcean.

And this from Mudflats:

First of all, let’s be clear that the country of ownership of the oil company has nothing to do with the trustworthiness of the drilling. Actually, it’s up to the country where the drilling occurs to regulate it. The United States of America sets the rules for what kind of tankers can travel the waters, and what kind of safety measures are required on drilling rigs. BP’s rigs elsewhere in the world have those features. In the good ol’ U.S. of A, not so.

Ah, but here is the genius of the Tweet vs, say, the Facebook note (or an actual interview)…it does not allow for such details! (Realities may be the better word). Also, and here’s the kicker, Todd Palin worked for BP for 18 years.