Rush Limbaugh: Oil Spill Actually Great Because It Will Scare Away The People, Turtles 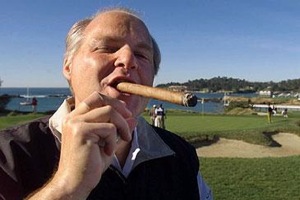 Well, at least someone is happy about what could become the worst oil disaster in American history. Rush Limbaugh took to the airwaves yesterday with the goal of debunking the media-perpetuated myth that the Gulf oil spill is all bad– at least it will clear the beaches and make the turtles go away, and “at some point, the beach will fix itself.” Rush is entitled to an opinion on this because he owns beachfront property, unlike most of the media, who “don’t have any skin in the game.”

Limbaugh provided a disclaimer before searching for the oil spill’s silver lining:

Establishing his extensive background on the matter, Limbaugh then went on to give his opinion of the events unfolding after the spill hits the beach. For one, the people will be gone, leaving the beach calm and collected. The turtles will be “smart enough” to steer clear of the Rhode-Island-sized oil slick expanding towards them. And any inconveniences will go away because “the beach will fix itself.” He concludes by admitting that, when he accuses President Obama of causing the oil spill, he’s just saying that “for the fun of it.”