Sarah Palin: ‘Nothing Remotely Racist’ About ‘Obama’s Shuck And Jive’ Because… Piper Is Part Eskimo?

Sarah Palin: ‘Nothing Remotely Racist’ About ‘Obama’s Shuck And Jive’ Because… Piper Is Part Eskimo? 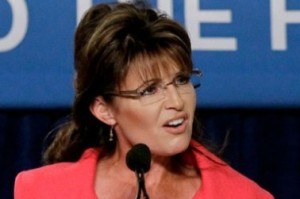 Former Alaska Governor Sarah Palin has responded to critics who objected to the racial connotations of her use of the phrase “Obama’s shuck and jive” by assuring them that, despite the phrase’s clearly racial origins, there was “nothing remotely racist” about her use of it on our first black president. Rather than chalk it up to an innocent ignorance of those connotations, Palin claims they simply don’t exist because Andrew Cuomo deployed the phrase (in equally loaded fashion) against then-Sen. Barack Obama during the 2008 campaign, and because she uses the phrase on her own part-Eskimo daughter, Piper Palin, and Eskimos are just like black people, right?

For the record, there was nothing remotely racist in my use of the phrase “shuck and jive” – a phrase which many people have used, including Chris Matthews, Andrew Cuomo, and White House Press Secretary Jay Carney to name a few off the top of my head. In fact, Andrew Cuomo also used the phrase in reference to Barack Obama, and the fact that Mr. Cuomo and I used the phrase in relation to President Obama signifies nothing out of the ordinary. I would have used the exact same expression if I had been writing about President Carter, whose foreign policy rivaled Obama’s in its ineptitude, or about the Nixon administration, which was also famously rocked by a cover-up.

I’ve been known to use the phrase most often when chastising my daughter Piper to stop procrastinating and do her homework. As she is part Yup’ik Eskimo, I’m not sure if this term would be deemed offensive when it’s directed at her or if it would be considered benign as in the case of Chris Matthews’ use of it in reference to Rachel Maddow.

Palin is correct that there are certain racialized insults that don’t generate outrage when deployed by a white person, when the target is white, or even part Eskimo. For example, if Palin chastised Piper for “tap-dancing around” a question about her homework, that wouldn’t be offensive, because white people never thought up a stereotype about tap-dancing to marginalize Eskimos. Ditto Rachel Maddow.

However, deploy that same phrase against our first black president, Barack Obama, and you’d get a different result, as Andrew Cuomo did when he used “shuck and jive” in reference to then-Sen. Obama’s 2008 campaign, when CNN’s Roland Martin said this:

“Shucking and jiving” have long been words used as a negative assessment of African Americans, along the lines of a “foot shufflin’ Negro.” In fact, I don’t recall ever hearing the phrase used in reference to anyone white.

According to a story in Newsday, “The 1994 book ‘Juba to Jive, a Dictionary of African-American Slang,’ says ‘shuck and jive’ dates back to the 1870s and was an ‘originally southern ‘Negro’ expression for clowning, lying, pretense.’”

There is a such thing as political correctness gone mad, with folks being too sensitive. But it’s also about respect. And America’s long racial and sordid history still has ramifications today.

Now, the phrase is common enough in the American lexicon that Cuomo, and Palin, could easily say “Sorry, I didn’t realize it had that connotation, I didn’t mean it that way” (which is pretty much what Cuomo did), at which point the reader could judge the credibility of that apology for themselves. Palin offers no such apology, and simply reserves the right to call President Obama a jive turkey in perpetuity. The reader is then left to judge Palin’s credibility when it comes to divining the racism in certain phrases. On that count, Palin was unable to muster a scintilla of outrage over 11 consecutive uses of the n-word (uncensored) during a live radio broadcast. Maybe she calls Piper that, too.