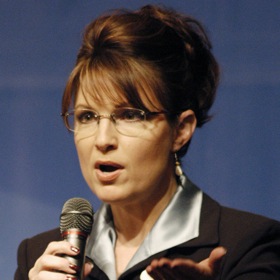 It seems that when Sarah Palin criticized the current socialized Canadian health care system last fall, she knew what she was talking about (sort of). Palin, who during her attack on the similar system proposed in the United States coined the term “death panels,” admitted to a crowd of supporters in Calgary, Alberta that in her youth she and her family would sneak into Canada from their remote Alaskan town for health care. She told the audience:

“My first five years of life we spent in Skagway, Alaska, right there by Whitehorse. Believe it or not — this was in the ’60s — we used to hustle on over the border for health care that we would receive in Whitehorse. I remember my brother, he burned his ankle in some little kid accident thing and my parents had to put him on a train and rush him over to Whitehorse and I think, isn’t that kind of ironic now. Zooming over the border, getting health care from Canada…”

The fact that she understood the irony is probably a sign that she could predict what left-leaning political commentators in the United States were going to do with that quote. The blogosphere has called it “self-destructive” and “explicit endorsement of liberal policy,” with many others choosing simply to relay the soundbite with little context other than her opposition to socialized health care in the US and her comments against the current Canadian system. Some offered the fact that she had told a similar story before that sent her family on a trip to Juneau (nearly equidistant to her home in Skagway, it appears), instead. The context is that the health care the Palin family received was from a different type of socialized health care system than the one currently in place in the country.

Ah, but here’s the rub. What sort health care system did Canada and/or the Yukon Territory have in the 1960’s? Politico notes that federal health insurance was not put into effect until 1972, although Yukon, the territory Palin admitted to sneaking into for health insurance, did have a government-subsidized plan beginning in 1960. Talking Points Memo claims Canadian Medicare was implemented in 1966 on a national level. The Canadian health care system as it exists today began to take shape in the 1980s with the Canada Health Act becoming more explicit in how health care funds should be distributed. Also, crossing the Canada/US border — particularly as far north as where Palin was, was not exactly difficult.

Socialist or not, should Palin be interested still in running for the presidency in 2012, making comments that could be easily interpreted to contradict her previous statements is a dangerous habit, one that she should begin to curb. She has already been called out on everything from her double-standard on the politically incorrect use of the word “retarded” to the fact that Alaska’s minimal population means her state reaps more benefits from the federal government than any other. She cannot afford the political assault that comes from making statements like these, innocent though they may be, because the history behind them is cloudy enough and her reputation shaky enough for her opponents to claim mischievous intentions.