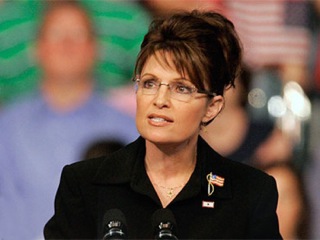 America awoke this morning to a new civil war– no, not in Libya (that one’s old by now) or Syria or Yemen, but on the internet, where Sarah Palin used her regular column on Facebook.com to trash conservative site The Daily Caller. How did the site that took down Ezra Klein’s Journolist become public enemy #1 for Lady Columbia herself? Simple: they deigned to publish a quote of hers in the second page of an article, where no one with Palin’s attention span would ever read it.

No, this isn’t an Onion post: Sarah Palin is fuming over reporter Chris Moody‘s decision to construct his article about her in a way that displeases her. “Goodness,” she writes from her lofty perch as a hard news reporter journalism professor acclaimed writer former Vice Presidential candidate, “cleaning up the sloppiness of reporters could be a full time job.” Betraying her inability to read through a news story of more than 500 words, she complains she “didn’t even notice” her own comments, and claims that being relegated to the internet nether-region that is “Facebook notes” is “further proof that the media can’t be trusted even to print a statement in a manner people can read.” Her relevant comments appeared on the second page in response to criticism that a law she passed during her two-year tenure as governor directly benefited her TLC reality show, followed by a more than 600-word response from Palin from which the original quote was pulled. Had the comments been placed before an explanation of the story, of course, would have made it impossible to follow. Most outrageously, however, Palin punches up from Moody to DC proprietor Tucker Carlson, accusing him of “publicly using a degrading term to describe women” and begging him to exhibit more “professionalism.”

Palin is a superstar on the right for her uncanny ability to bring out the worst in liberals and, certainly, from getting Kathy Griffin to accuse her of bullying to being called the c-word by Bill Maher, Palin knows nothing if not how to push buttons. But when sometimes it feels as if your only function as a political entity is stirring people up, you have to take pretty good aim. Attacking Carlson and the Daily Caller as a whole creates an opening for her detractors to criticize her not as anti-liberal, anti-bias, or even anti-misinformation: she comes off as anti-freedom of the press, plain and simple. She does not decry the left- or right-wing media, but the structure upheld by the First Amendment as a whole: the media as an entity that is to be curbed, manhandled, and ultimately silenced when inconvenient. Otherwise, there is little that would explain why being quoted in full in an article on a website run by a fellow conservative would inspire such rage. The Daily Caller may be biased, but it’s certainly no Media Matters.

But to turn Palin’s betrayal of a publication that has been overwhelmingly favorable to her since its inception into an opportunity to write a hack job on her would be unfair to her new adversaries over at the Daily Caller. The story is as much about their journalism as her intolerance for it. While Palin was upholding such conservative views as the union of church and state or supporting her North Korean allies, the head of the publication she now decries for media bias spent the better part of a decade challenging liberal talking points in a pre-Fox News world. News cycles in the 21st century are far too loaded to make remembering what Tucker Carlson was up to before the Daily Caller easy, but, among many roles, Carlson spent five years face to face with James Carville promoting conservative principles on Crossfire and later hosting a show on MSNBC before landing at Fox News. In other words, Carlson, unlike Palin, has never been one to preach to the choir, and for that he and his publication have earned a certain credibility Palin could never dream to acquire.

Yes, The Daily Caller itself has veered into the morally questionable waters of publishing private emails with the intention of getting right-wing journalists fired and engaging in comical albeit juvenile web domain warfare. But just as Palin could never in her wildest dreams find herself engaging the other side productively in the way Carlson has made a career out of, neither Carlson nor the Daily Caller could ever hope to do as much damage to the right as Palin has in her nearly-three-year career as a professional Angry Person™. By inserting herself in the Tea Party movement—initially a coalition of Ron Paul supporters that had nothing to do with anything she stood for— and insisting on being a relevant political figure despite her dearth of academic background, communications skills, employment, or overall likability, Palin has crippled the misnamed “conservative” (more aptly defined as pro-freedom) right wing such that it is difficult to see the Republican Party win back the presidency for at least the next decade. Living in that sort of glass house, it’s probably best not to throw stones a house with as strong a foundation among conservatives as Carlson’s.

This post has been updated from its original version.