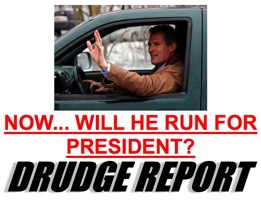 Happy Anniversary Mr. President. Oy. In the words of Jake Tapper, “one of the bluest states in the nation just gave President Obama the WORST anniversary gift he could think of.” Or at least one of them. The day after recriminations and analysis have already started as everyone from the White House on down tries to figure out how this happened and what to do next. And not surprisingly, plenty of people are weighing in.

The big question obviously is whether Brown’s victory, which shifts the balance in the Senate, signals the end of health care reform. Plenty of doomsdayers yesterday were predicting that much and continue to do so today, though as a number of people have already pointed out the Dems still have a 59-41 majority which is, you know, not exactly the end of the world. A line of thinking I suspect we will be hearing more of in the next few days. In the meantime a quick look at reactions.

We’re familiar with the vote that was cast today: Some of the same sentiment that propelled [Brown’s] campaign, propelled ours — the sense that this economy doesn’t work particularly well for middle class, working people … You overlay the fact that we’re in a recession — the deepest since the Great Depression — and people are understandably agitated. There is a restiveness — and I think it’s been intensified by the economy and by the recession — that is real. There were many factors that were peculiar to this race, … and let’s give Brown his due: He ran a spectacular campaign.

These are emotional times on all sides. I feel myself slipping into fury too often, and the blogosphere is currently red-hot. But Brown’s speech does remind us that it should be possible to be civil to one another, even during these intense times.

Republican Scott Brown’s eye-opening victory in Massachusetts Tuesday has unmistakably framed the problem for President Barack Obama and the Democratic Party: The same forces of disgust with establishment politicians and hunger for change in Washington that vaulted Obama to power 14 months ago can be harnessed with equal success by people who want to stop his agenda in its tracks.

Though the Republicans are ostensible winners, the meaning of this victory may be lost. The vote, by most accounts, was anti-Coakley and largely in opposition to D.C. Democrats’ over-reaching plans to regulate and legislate our economy into the ground. But that buck won’t stop at the president’s desk…Now, victory by Brown suddenly gives the White House the best gift they could hope for: the threat of Republican resurgence and the cover he needs to start governing again from the center — where most Americans assumed Obama would spend his time.

As a result, Mr. Obama will spend the first anniversary of his inauguration watching Democrats tangle in an unseemly quarrel over who lost Massachusetts — Ms. Coakley’s pollster, Celinda Lake, called the Huffington Post four hours before the polls closed to blame Democratic leaders in Washington — and contemplating a political landscape that has been thoroughly upended in the course of only 10 days. The implications are sure to be far-reaching, and the result leaves Mr. Obama with a long list of tough choices.

The wildest of these fantasies, and surely not one meant terribly seriously, promotes Scott Brown as a candidate for the Republican nomination for President in 2012. Brown is a formidable presence, as Martha Coakley and the Democrats discovered too late, but do we really need another former state Senator with next to no experience in national politics on a major-party ticket?…The elimination of Martha Coakley means that Democrats will throw a stronger candidate against him in two years, although Coakley was the one candidate who had won statewide office and had the largest constituency. The circumstances that allowed Brown to win a decisive victory yesterday may well change significantly by 2012, although so far the White House and Congressional leadership seem to indicate it won’t.