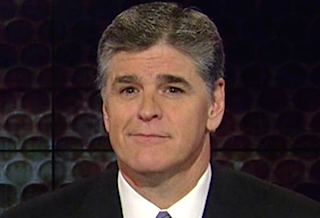 Sean Hannity is not a fan of pot. On his radio show Tuesday, the Fox News host brought up Colorado’s recent legalization of recreational marijuana and stories about kids “getting into their parents’ pot-laced goodies — because they have, I guess, pot candy and pot brownies and pot this and pot that.” And even worse, dogs are overdosing on the stuff!

The host had two guests on with him, one who was mostly pro-legalization (“Drugs are like alcohol and guns and they need to be put away in a safe place”) and one who was vehemently against (“I’ve read about people dying already from smoking too much pot and then falling”), but in the clip below he spends most of his time lamenting the apparent dangers of marijuana and putting forth the notion that smoking pot can lead directly to death.

Moving beyond babies and dogs, Hannity settled on the recent story out of Colorado about 19-year-old college student Levy Thamba who leaped from a fourth-floor hotel balcony after apparently eating a marijuana cookie. According to the autopsy report, “marijuana intoxication” was listed as a “significant contributing factor” to the death.

As Hannity’s pro-legalization guest pointed out, the key word there is “contributing,” meaning authorities could not say that marijuana use was solely responsible for the student’s death. And even if they could somehow prove that the drug caused the student to jump off of the balcony, that is not the same as “overdosing” on a drug that induces actual medical harm.

But that didn’t stop the host, who barreled forward, declaring that Thamba “overdosed on edible marijuana” and shouting “he was stoned out of his mind!” Again, even if one could definitively blame marijuana for this clearly tragic incident, it is hardly an argument against the legalization of the drug.

All Hannity could come up with one marijuana-related death that no one can say was the direct result of marijuana. Therefore, weed should be illegal?