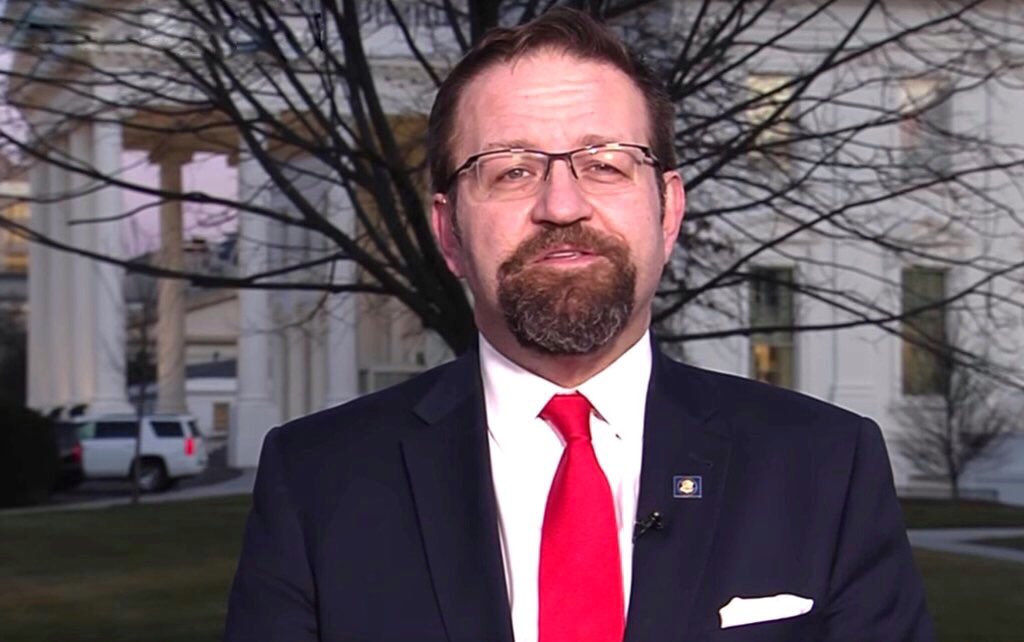 It was last Tuesday night and I was doing what any 20-something struggling journalist would do — throwing back Natty Lights, aggressively betting on the Lakers game, and calling Donald Trump’s lackeys cowards on Twitter.

The Trump World character I was particularly pissed off with at the time was Sebastian Gorka, who is best known for sounding like a super villain and (now) informally advising the White House by way of frequent Fox & Friends appearances.

There are obvious reasons for disliking Gorka, but putting them aside, I was actually outraged by the fact he illegally parked his shitty four cylinder Mustang earlier that day. Look, if you sell your soul to the Trump administration, I’d imagine the least you can do is shell out the extra few grand for the V8 model, instead of that laughable, 2.3L EcoBoost thing Gorka drives — which he parked directly on an Arlington, Virginia sidewalk.

“Seb Gorka illegally parked his shitty four cylinder Mustang on the sidewalk. Can’t even afford a 5.0 V8 GT. Sad!… Seriously tho what the hell is the point of buying a Mustang if it’s not a V8. Answer me coward @SebGorka,” I tweeted.

And those two tweets are what caused — or triggered, if you will — Gorka to challenge me to a fight via email. Or at least so it seems.

It was around 11 p.m. and I had just lost an absurd amount of money betting on the Milwaukee Bucks, and that’s when my phone pinged. It was Gorka. “So where do you want to meet,” he asked — as any normal, gray-haired 47-year-old ex-White House adviser would after having his masculinity challenged by a 20-something college bro online.

While he didn’t use the exact word “fight,” in internet-hardo language, I view “where do you want to meet” as equivalent to “let’s take it outside.”

And, man, I was ready to take this off the timeline and onto K Street.

I figured if he really is a tough guy who wants to fight then we should take this to the next level — a level where only one of us walks out alive, like the Good Ol’ Days. Yes, I’m talking about a pistol duel.

I’ve long said that America might be a better country if we just handled our problems with respectable, properly regulated duels — so Gorka’s challenge was a chance to live out my dream.

“Name a time and place and I’m there. What’re we meeting for, an interview? Debate? A Hamilton-Burr style pistol duel?” I responded.

Gorka — completing his transformation into the Chapo Trap House parody of himself — responded around 12 a.m. and said, “Given that your such a internet warrior it would be obvious.”

It was morning by the time I read that message, and I woke up overcome with joy. I finally had a chance to face off in “a Wogdon affair” — Wogdon being the type of flintlock dueling pistol Aaron Burr used to fatally wound Alexander Hamilton. “So, you’re saying we should obviously have a pistol duel on K St. I agree,” I said.

Because wouldn’t that be the perfect Beltway face-off — a D.C. journo vs. a Trump lackey in a duel with references to Hamilton included? It’s almost everything the Washington D. C.  Media Class loves.

“So clearly you are a lunatic who wants to break federal and D.C. law. Why am I not surprised? I’m definitely saving this email,” Gorka said, backing out of what would have made for excellent cable news content and lots of viral Mediaite posts.

His deescalation of the exchange made no sense. The whole reason we were having this ridiculous, anime dialogue-esque email banter is because Gorka broke the law by parking his Shitty Mustang on the sidewalk — but now he was worried about obeying laws? “Gorka, you literally just broke the law by parking illegally on the sidewalk… But now you suddenly care about following laws? Right. Sounds like a cop-out so you don’t have to face me — I knew you were a coward,” I pinged back.

“Right. Apt comparison. You dolt of a snowflake,” Gorka replied, almost immediately. I’m still not sure what a “dolt of a snowflake” is, but it sounds like a Tomi Lahren-ism enhanced with Gorka’s international super villain flair. 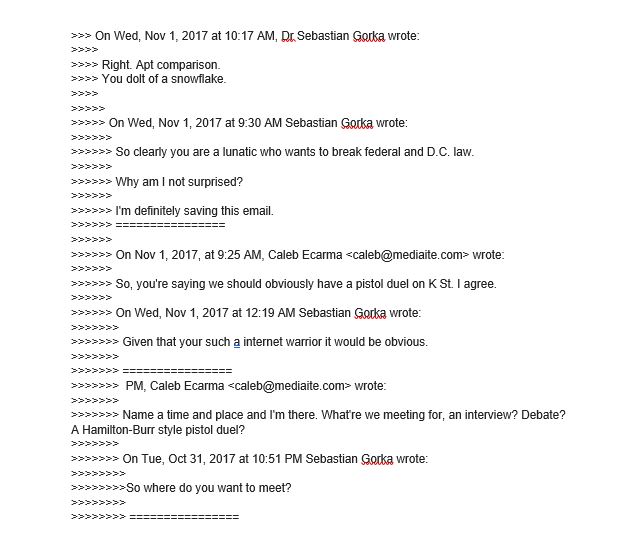 As funny as the snowflake comment was, I was pissed Gorka was avoiding our fight, which led me to seethe, “Hey man, you’re the one who asked to meet me and now you’re backing out — so who’s the real dolt of a snowflake?”

In Fox News conservatism vernacular, “snowflake” is the ultimate insult — and to be identified one is nothing short of career-ending. So the guy just couldn’t help himself. “Pick you up at 5? (You’ll recognize the car, right?)” Gorka responded — again, as any person previously working for the president would do in this situation.

Hell yeah, I thought, he was back in fighting mode. “Absolutely, I can spot a four cylinder Ford Focus posing as a muscle car from a mile away. I’ll be at [redacted address],” I said.

My cards — and address — were all on the table, but this is where the conversation grew stale, as Gorka changed his challenge from what seemed like a fight — or pistol duel! — to a “televised debate.”

He responded: “As I thought. You’re all mouth and NO trousers. If you’re too scared to meet today to talk, how about this? I’ll organize a televised debate with you on the topic of ‘Why Donald Trump is Good for America.’ Next week good? (Unless that’s too scary too?) I’ll give you an hour to think about it. Think of it as a way to show your mettle. However I’m not holding my breath. (Tick, tock………).” 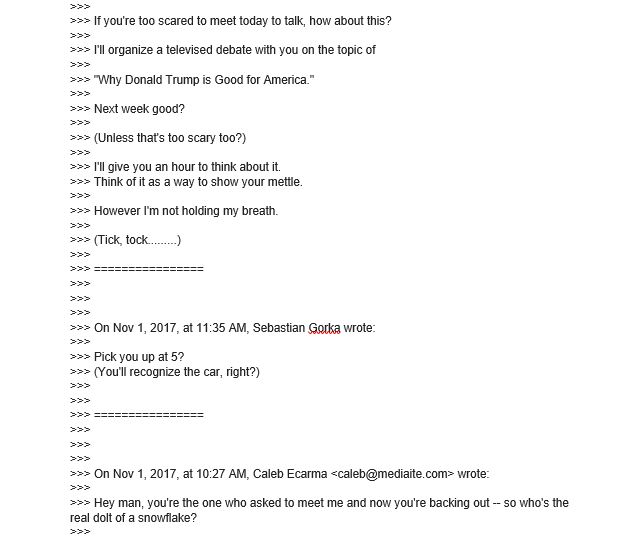 First of all, I’m not sure what the deal is with these Fox News types constantly saying “tick, tock.” Second, at this point in the email exchange, I had already accepted Gorka’s requests to meet not once, not twice, but three different times — and he never even acknowledged me accepting his challenges.

If he wasn’t actually willing to meet and fight, then I’m not sure why Gorka thought bravely confronting me via email would intimidate me — maybe he assumed I was a member of the Washington Access Journalism Press Corps desperate for weak scoops from stupid people. Perhaps he figured I was like Serial Plagiarizer Ben Domenech who used his right-wing rag The Federalist as Gorka’s personal PR firm, “breaking” the story of his White House ousting by suggesting the “counterterrorism expert” left for bigger things.

“Multiple sources close to Gorka are saying he does not drive a Shitty Mustang. In fact, his car is actually better than the V8 version because of fuel efficiency, insiders told this reporter” — is what I’d imagine Domenech or Mollie Hemingway might write in my situation.

Speaking for myself and my Liberal Journalist peers, the second nicest thing Gorka can expect to be called is a “coward” who drives a Shitty Mustang — the nicest being that time Jonathan Swan said Gorka actually “was no anti-Semite,” as the title of Not A Nazi is really the best a Trump lackey can wish for.

But I figured if we couldn’t have a fight, then I’d take a televised debate and have it out. “Next week is perfect. Like I said, give me a time and place and I’m there,” I shot back. 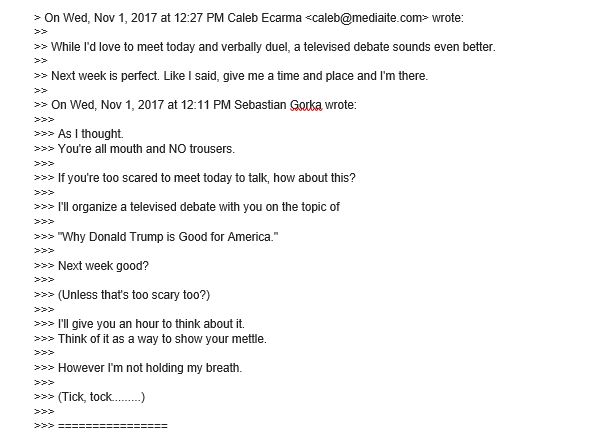 I sent him a follow-up email later that day and still got nothing, so I gave him a call the next morning. Gorka answered and I told him I was still ready for our verbal duel, to which he said, “Breitbart is going to be reaching out to you about it.”

Unfortunately, I haven’t received anything from Breitbart News about a debate with Gorka yet, but maybe the disgraced White House adviser will come through and we can give the internet a good shouting match. Hell, if he’s too scared to even have a debate than we could at least get back to the heart of this disagreement and have a drag race — I’d bet good money that my Honda Nighthawk bike could take his Shitty Mustang.

But as of this piece publishing, it seems that Gorka is “all mouth and NO trousers.”