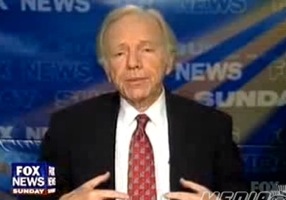 Fox News Sunday host Chris Wallace had on Senators Lamar Alexander (R-TN) and Joe Lieberman (I-CT) today, and discussed, among other things, the weapons reduction treaty struck earlier in the week between Russia and the United States (which still needs congressional and parliamentary approval by both nations.) Lieberman sounded bearish on the odds of the treaty (known as START II) passing, unless there were “major changes” to the treaty.

“I don’t believe that there will be 67 votes to ratify the treaty unless the administration does two things,” Lieberman said. “First: commit to modernize our nuclear stockpile, so as we have less nuclear weapons we know that they are capable if, God forbid, we need them. And secondly, to make absolutely clear that the statements by Russian president [Dmitry] Medvedev at the signing in program, that seemed to suggest that if we continue to build ballistic missile defense in Europe they may pull out of this treaty, is just not acceptable to us. We need that defense to protect our allies and ourselves from Iran.”

Lieberman’s comments foreshadow what seems likely to be a piqued and difficult battle for the White House on the nuclear arms control front. The president is set to meet with a host of world leaders this week to discuss and outline a system for weapons reduction. Domestically, however, his administration needs to cobble together at least eight Republicans (nine, if Lieberman crosses party lines) to get START II into law. As for the specific complaints that Lieberman has with the proposed treaty, tinkering with the missile defense approach seems to be the most difficult task, as it was a major sticking point in U.S.-Russia negotiations.

In keeping with the dim prospects put forth by Lieberman, Alexander concurred, sounding cautious, if not obstructionist, in adding “there is not a chance the treaty will be approved this year. It took a year and a half for to approve the START I Treaty, and with the Supreme Court pushed to the front of the agenda in the Senate, and with jobs, terror, and debt being our major issues we should be worrying about, this is an issue for next year.”

The sentiments and concerns expressed by Senators Lieberman and Alexander were not necessarily shared Secretary of State Hillary Clinton who defended the agreement during an appearance on NBC’s Meet the Press, ostensibly saying that nations with nuclear arms should be well aware of the threat that nuclear material could fall into terrorist hands: “It’s a serious threat. We know that terrorist groups, primarily Al Qaeda, persist in their efforts to obtain enough nuclear material to try to do something that would cause just such mass havoc and terror and damage and destruction that it would be devastating.”