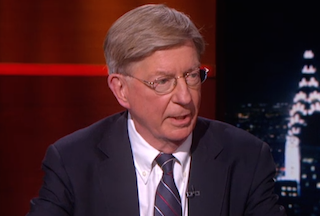 Last weekend Washington Post conservative columnist George Will argued that progressivism had made sexual assault victimhood — or, as he put it, “sexual assault” victimhood — a “coveted status” that “conferred privileges” on college campuses, and concluded that new federal mandates concerning the campus investigations of sexual assault cases would deny due process to the accused.

It didn’t go over well. On Thursday, Senator Richard Blumenthal (D-CT) and several other lawmakers sent a letter to Will about his column, which they said they read with “dismay.”

“Your column reiterates ancient beliefs about sexual assault that are inconsistent with the reality of victims’ experience,” they wrote. “Your words contribute to the exact culture that discourages reporting and forces victims into hiding and away from much needed services. More egregiously, you trivialize the scourge of sexual assault, putting the phrase in scare quotes and treating this crime as a socially acceptable phenomenon. It is in fact a spreading epidemic, and you legitimize the myths that victims and victim advocates have worked tirelessly for decades to combat.”

RELATED: WaPo’s Advice to Women Who Don’t Want to Be Raped: Get Married

The senators added that far from receiving “privileges,” sexual assault victims were often forsaken by the very institutions that could help them, and called Will’s parsing of statistics irrelevant when faced with survivors’ experiences:

“The culture you described is so antiquated, so counterintuitive and so contrary to anything we heard that we hope you will make an effort to hear the stories survivors bravely shared with us about the struggles they face in addressing what has happened to them—often with little meaningful assistance from authorities expected to help them. In this instance, your writing, which purports to be based on accurate facts and figures, has not only shown a fundamental disrespect to survivors, but also includes harmful rhetoric that had made addressing this issue so difficult.

“Your column questions the accuracy of statistics around this problem. Very few of our conversations with students included numbers; what we have heard are personal experiences — horrifying and tragic stories that show exactly why this problem must be addressed. There is no acceptable number of sexual assaults; anything more than zero is unacceptable.” 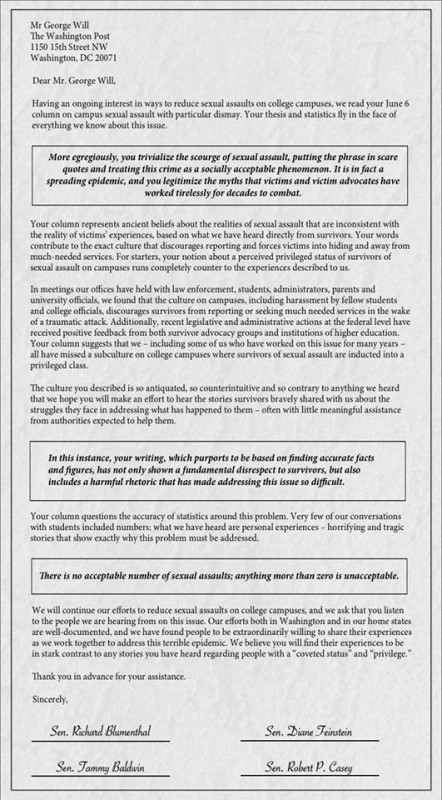