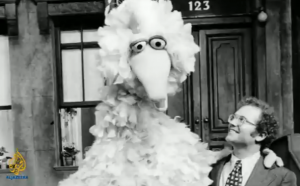 Anyone who’s grown up in this country is likely familiar with Sesame Street and its cheery, often-educational songs. But a new Al Jazeera documentary, Songs of War, reports that music may have been used for entirely different purposes: as a torture method for detainees at Guantanamo Bay and Abu Ghraib. And Christopher Cerf, the award-winning musician who composed the show’s music for 40 years, isn’t happy about it.

Cerf composed more than 200 songs, and in 2003, U.S. intelligence services reportedly used some of those songs for torture. Thomas Keenan, director of the Human Right’s Project at Bard College, said:

“Prisoners were forced to put on headphones. They were attached to chairs, headphones were attached to their heads, and they were left alone just with the music for very long periods of time. Sometimes hours, even days on end, listening to repeated loud music.”

Moazzam Begg, a former detainee at Guantanamo Bay and Bagram, said, “The music was so loud. And it was probably some of the worst torture that they faced.”

When he learned about this, Cerf said he thought there’s no way it could be true — and ventured to learn more about it. “In Guantanamo they actually used music to break prisoners. So the idea that my music had a role in that is kind of outrageous,” he said. “This is fascinating to me both because of the horror of music being perverted to serve evil purposes if you like, but I’m also interested in how that’s done. What is it about music that would make it work for that purpose?”

Keenan has an answer to that question: “It is music’s capacity to take over your mind and invade your inner experience that makes it so terrifying as a potential weapon.”

The idea isn’t entirely novel. In 2003, reports said songs from Sesame Street and Barney were used to break Iraqi POWs.