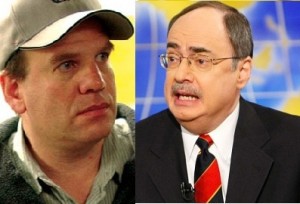 Former Baltimore Sun reporter and The Wire creator David Simon has penned a lengthy, thoughtful essay on the media’s treatment of the still-unfolding Gen. David Petraeus scandal, raising excellent questions about the news value of such a story. Within the golden cake of that critique, though, is a creamy filling of media feud, as Simon (David) absolutely eviscerates Politico columnist Roger Simon over his treatment of the Petraeus scandal. In the parlance of The Wire’s Baltimore denizens, Roger Simon got got.

David Petraeus never should have resigned as director of the Central Intelligence Agency because he was involved in a sex scandal.

Petraeus should have resigned because if he were any more dimwitted, you would have had to water him.

I know this is not what we have been told for years about Petraeus. I know we have been told he is some kind of towering genius: West Point grad, Princeton Ph.D., four-star general. But add one other quality: blockhead.

Say what you will about Simon (Roger), there aren’t nearly enough political columnists nowadays who can name Lucy Van Pelt as an influence.

R. Simon goes on to flog that theme like a roll of impudent baloney, and concludes that Gen. David Petraeus deserves what he’s getting now.

David Simon, on the other hand, sees the Petraeus scandal as an unnecessary intrusion into a matter best left private, and lends some hard-won personal experience to that insight. Writing for Salon, Simon (David) scores point after point on the media’s hypocrisy regarding sex scandals, but also on Gen. Petraeus and the Iraq War:

For one thing, if Mr. Simon wanted to be honest, he might acknowledge that it was Petraeus who saw the morass that was Iraq even as it began, who famously turned to a journalist on the march into Baghdad with the 101st Airborne and declared openly: I know how this begins, but explain to me how this ends?  That alone makes the man more astute and more valuable than an entire White House, most of the Pentagon, and much of the American press corps, which itself failed to raise much worry when war in Iraq was being debated, or rather, not seriously debated at all. It certainly makes Petraeus smarter than most of America, which largely supported that disastrous intervention.

The “Mr. Simon” he’s referring to is the aforementioned Roger, whom David takes apart like a loose-fitting set of Duplo blocks:

To wit, let us parse the work of one Roger Simon, my namesake alas, a veteran political writer currently slinging witticisms and paper-thin insight for Politico.com:

That’s the headline. Let’s venture southward into the prose and see what we find:

Ha, hah! That’s great stuff. Mr. Simon is saying that the head of the CIA is as dumb as plant. Because you have to water them. A tasty bon mot, and we’re off and running.

Simon (David) goes off on Simon (Roger) for about another ten paragraphs, which you’ll have to read in order to find out how a “Nuevo Laredo whorehouse” and a “fistful of fifties” fits in. The important thing is, Simon (David) is absolutely right about one thing: if there was never any threat to national security, or to the performance of Petraeus’ duties, why the hell are we talking about this?

Where I part ways with David Simon is in his ire at the media, at least in this case. We didn’t find out about this story because of an over-eager tabloid reporter, we found out about it because Jill Kelley had a friend at the FBI who thought that agency should be her personal internet white knight. Simon (David) is right, reporting on stuff like this is what “shitbird” reporters do, but it’s not the kind of thing the FBI and the Pentagon ought to waste their time on.