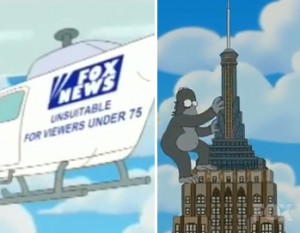 Last night, for the second week in a row, The Simpsons took a shot at corporate cousin Fox News. However, if you’re clicking over to Hulu or Fox’s websites to check out this week’s helicopter gag, you’re going to be disappointed. WebNewser has noticed that the joke, from the episode’s opening credits, has been removed. Did someone at Fox (other than Bill O’Reilly) complain?

Well, maybe. However, as much as we love a good conspiracy, our money is on WebNewser’s second hypothesis, that the gag was added at the very last minute and after the websites had received their copy. We can easily imagine the producers of the show getting so excited about the media coverage of the first joke (and thoroughly enjoying O’Reilly’s take down of it) that they rushed to their computers to add the new joke to the next episode, which was finished long in advance of airing. Besides, as much as some might like to picture shadowy Fox executives wringing their hands over the joke, we just can’t imagine any exec exclaiming, “What? People are writing about our two-decade-old series all over the internet because of one joke?! Well dont let them do it again!”

However, you’d think that the TV channels would get the shows before the websites so you never know…

UPDATE Simpsons’ Executive Producer Al Jean revealed in an exclusive interview with the NY Times David Itzkoff that the motives behind the anti-Fox News gag were light in spirit:

Mr. Jean said the “Simpsons” producers — in particular, the creator of the series, Matt Groening — were pleased with how the first Fox News joke seemed to ruffle the feathers of Bill O’Reilly, the host of the Fox News program “The O’Reilly Factor.” (On his show last week, Mr. O’Reilly played the “Simpsons” satire of Fox News and, with a smile, said of the cartoon family: “Pinheads? I believe so.”)

The “Simpsons” producers could not let that remark stand, so they rushed their second Fox News joke into Sunday’s episode — so late in the production process that the gag could only be inserted into the version shown in North America, but not into versions shown in foreign markets or on the Internet.

“There’s a lot of masters that go out,” Mr. Jean said in a telephone interview, “so to save money we just put it in the one master that’s for the U.S. and Canada. More money that will then go to Fox News and undoubtedly to Bill O’Reilly.”

Mr. Jean emphasized that neither he nor his “Simpsons” colleagues have ever been told by their corporate Fox parents to stop making fun of Fox News.

Check out the opening from Fox below as well as the Hulu version below that: