Oops: Ben Carson Asked an Entire Class to Identify the Dumbest Kid, and They Did
it's not brain surgery

Oops: Ben Carson Asked an Entire Class to Identify the Dumbest Kid, and They Did 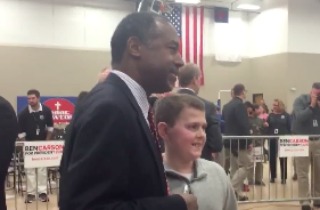 Ben Carson had a brief misfire on the campaign trail today, when a question he asked caused one child to be singled-out by his peers as the “worst student” in his class.

Carson was speaking at a school in Ceder Rapids, Iowa today, where the Des Moines Register reported students from the Isaac Newton Christian Academy were among the 500 estimated people in attendance. During his speech, Carson went into a story he frequently uses about how he changed his life through reading and constant studiousness when his Detroit classmates previously considered him thoroughly unintelligent.

“As a fifth grade student, I was a horrible student,” Carson said. “Anybody here in fifth grade? Who’s the worst student?”

What Carson might not have expected was that the children actually answered the question:

After promising that he was only kidding, Carson went on to say “if you had asked that question in my classroom, there would have been no doubt” that the students in Carson’s class would’ve called him “the dumbest person in the world.”

When the event was over, Carson met the boy backstage, and encouraged him to follow his footsteps in medical science.

.@RealBenCarson just met the 5th grade student back stage. Said he wants him to become a neurosurgeon #iacaucus pic.twitter.com/XAO5LRcDYJ

Politico reported that Carson and the boy, who identified himself as Seth, spent some time bonding over childhood experiences, and that the boy was not embarrassed by the incident.