So, Whatever Happened To That Couple With The Online Abortion Poll? 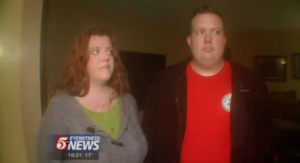 Last week we brought you the charming story of the Minnesota couple who created an online poll where anyone could vote on whether or not they abort their unborn child as a totally legit way to foster discussion on the topic of abortion. So, how are they doing? Well, since the story broke, it’s been pretty much proven that the whole thing is a hoax, the couple continues to deny it, and the wife’s been fired from her job over the whole thing. Wow. And I was so sure this was all going to end well.

First, let’s look at the whole hoax idea. From the very beginning, cynics have been pretty sure that the entire site was going to reveal itself to be pro-life propaganda by the end with the couple having “learned the error of their ways” and suddenly seeing the true importance of every human life or something. I mean, no matter how fame-hungry people are, their basic humanity usually keeps them from actually putting their child’s life in danger. Call it the Balloon Boy Rule. Why put your son in the balloon when he can totally chill in an attic instead.

So, Jezebel did some sleuthing and, lo and behold, the husband used to post a bunch of anti-abortion stuff on the Internet. Shocker! For instance, he went on a Daily Kos wiki (!) and changed the definition of “pro-choice” to this:

“The term ‘pro-choice’ is used by men and women who support a woman’s right to kill an unborn child.
The term means that a woman has the right to determine whether or not she will be pregnant by killing a baby that has already been conceived.”

Yep, that totally sounds like the writing of a guy who thinks it’s a good idea to let 4chan decide on his wife’s abortion. Absolutely!

Sure enough, the husband then gave an interview to CNN admitting the whole thing was a fake and that they never intended to terminate the pregnancy. Ha, you got us, guys!

The wife then wrote a post on the site claiming that her husband only “wishes” that abortion is off the table and that CNN just left her comments out of the news piece. She then goes on to say that she “wears the pants” on the abortion issue which only kind of sounds like something a staged villain in professional wrestling would say if professional wrestling had Cage Marital Spat Matches. This means that the whole thing is either still a hoax, or the most public tiff between spouses ever. Awesome.

Unsurprisingly, the couple’s been receiving some blowback for all of this. The wife, in fact, has been fired from her job because her actions “risked damaging the reputation of the company.” Really? A small, Minnesota software firm doesn’t want to be associated with an online abortion poll? Shockingly (SHOCKINGLY!), the couple tells Minnesota’s KTSP that they are considering legal action. Check out the news report on it below.

Well, that about wraps up the run down of this lovely story. Expect to see another bunch of stories about this couple when the December 7th end of the vote rolls around. I’m sure you’re all just on the edge of your seat to see where this goes.

(via Gawker and The Blaze)