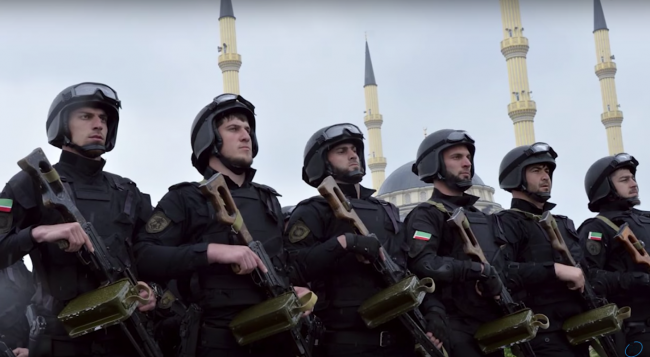 Believe it or not, there are people online — and in a few liberal newsrooms — who respond with genuine happiness when white Christians commit acts of terrorism. The glee doesn’t come in response to the act itself, but in the form of validation that terrorism is a phenomena distributed equally across all societies. “See,” they insist smugly, “not just Islam.”

And so it went over the weekend after reports began to emerge suggesting that more than 100 LGBT Russians living in Chechnya were rounded up, with several being executed. The allegations, first made in the Russian opposition newspaper, Novaya Gazeta, took off in western media where many saw it as the latest manifestation of Vladimir Putin’s war on gay people.

The aforesaid glee confronted me Monday morning in the form of this semi-comprehensible string of babble from a left-wing troll on Facebook, who linked me to an article covering the killings. 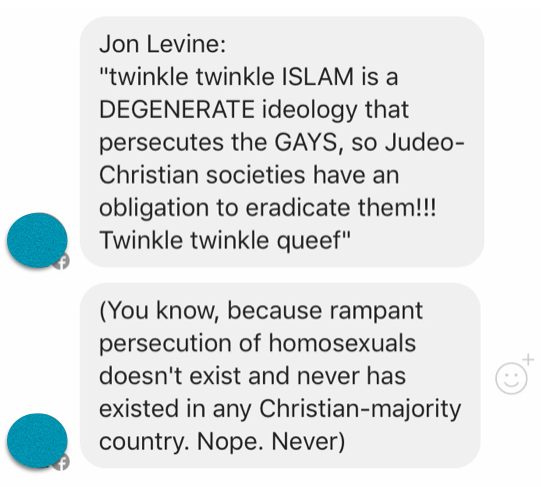 And while Christians and other terrorists certainly do strike from time to time, the glee this time was misplaced because I suspect this troll did not know that Chechnya is almost 95% Sunni Muslim. The territory’s leader, Ramzan Kadyrov, is also a devout Muslim who, according to The Guardian, has supported polygamy and compulsory wearing of the hijab for women outdoors. In fact, as The New York Times reported, the sweeps have little to do with Russia’s famous anti-gay posture but were instead allowed as a concession to the region’s Islamic sensibilities after gay rights groups began requesting permits for gay pride parades.

Now, no one would say that Moscow is a metropolis for gay life. The well-documented repression LGBT Russians face there is largely a result of the conservative Christian values of the Russian Orthodox Church. But there are worthy distinctions to be had here. There are no government sponsored mass roundups of gays happenings in Moscow. In fact, there’s a vibrant underground gay scene in many parts of Christian Russia. But don’t take my word for it, here’s The Guardian’s view:

Attitudes to LGBT rights are mixed in Russia, with an infamous law banning the “propaganda of homosexuality among minors” on the books. But Moscow and other big cities have a thriving gay scene, even if much of it remains underground. In Chechnya and the other Muslim republics of the North Caucasus, there is no discussion of the issue, and gay men do not even tell their closest friends of their orientation.

Given such mainstream reporting linking the region’s Islamic cultural characteristics to the crimes committed, you might find it surprising that someone like the earlier mentioned troll could be so misinformed. It’s not surprising, however, when you look at far-left websites that went to great lengths to carry water for the region’s Muslim leaders and shunt the blame entirely on Putin.

In the Huffington Posts’s write-up of the the Chechen crackdown, writer Nina Golgowski neglected to mention the regional religion at all. But, she did take care to note that Kadyrov was a “vocal supporter of Russian President Vladimir Putin” and that “The Russian Federation is known for its hostility to the LGBTQ community.” The Daily Dot (which, for the sake of argument, we will pretend is a legitimate website) explicitly pinned the blame on Putin and also neglected to mention the words “Islam” or “Muslim” in their write-up.

Now, I’m no fan of Vladimir Putin, but placing the blame entirely on him is, at best, misleading. Chechnya is semi-autonomous and, in exchange for Kadyrov’s loyalty, Putin has allowed him a great degree of internal control, so much so that The Guardian says he “often seems to transcend Russian laws.” Obviously Putin could have reined him in, but it wouldn’t be politically expedient to stick his neck out for a constituency that so transgressed the mores of the local population.

Even if other Russian regions, like say the largely Christian Republic of Karelia, began to execute LGBT residents, it still wouldn’t constitute the case that liberals want to make. Rather, it would only be the exception that proved the rule because you cannot separate Russia from the larger context of worldwide persecution of LGBT people. On that score, there is no debate. Most, if not all, countries that execute gay people are Muslim countries. If you weren’t aware, it’s because there are forces in media dedicated to keeping that information from you in the service of narratives they want to preserve.

What it all adds up to is the sad but inescapable conclusion that those who claim to be most committed to social justice would leave their causes out to dry to preserve the fantasies that motive them.