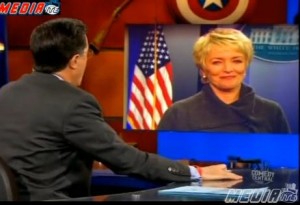 On the heels of Erick Erickson‘s Colbert Report appearance, in which he alleged that White House Director of Communications for Health Care Linda Douglass had referred to opponents of reform as “brownshirts,” the conservative fundit did a little bit of ex post facto-checking last night. Apparently, Colbert somehow came to doubt Erickson’s account (you’re welcome, Stephen. Again.) Douglass appeared on the show last night, but was it to nail, or be nailed?

Erickson made the accusation by way of explaining his own use of a Nazi reference, when Colbert confronted him with this tweet:

The link in that tweet is dead now, but it pointed to this AP story about the much-criticized Price-Waterhouse report on healthcare reform, which did contain a quote from Douglass:

White House health care spokeswoman Linda Douglass concurred. “This is an insurance industry analysis that is designed to reach a conclusion which benefits the industry, and does not represent what the bill does,” she said.

In fact, there’s no record of Douglass ever making any kind of Nazi comparison, unlike Erickson. He must have been counting on Colbert not to have done the research, and never to bring it up again. No such luck.

Colbert brought Douglass on to respond to the charge, and while she wouldn’t call Erickson a liar, she did say this was an example of “crazy, made-up stuff.” You know who else made up crazy stuff? Joseph Goebbels! Did I just nail Linda Douglass?

I have to wonder why Erickson didn’t just cop to using the Goebbels reference as pure hyperbole, or even double-down on it. Is Redstate really going to lose readers because the editor compared an Obama administration official to a Nazi? Far from exacting a cost, the users of this kind of rhetoric are routinely rewarded. Redstate doubtless got a Colbert traffic bump, and other practitioners of Godwin’s law also achieve varying levels of exposure.