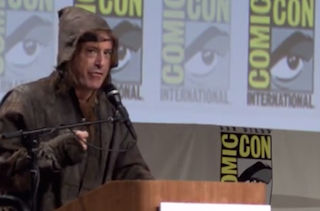 A very excited Stephen Colbert took the stage at this weekend’s San Diego Comic-Con to host a panel on the latest Lord of the Rings film, The Hobbit: The Battle of the Five Armies. Colbert, who had a short cameo in the previous installment, The Hobbit: The Desolation of Smaug, reprised his character of the Laketown Spy for the occasion.

Dressed in full Middle East regalia, the Tolkien fanatic introduced Peter Jackson and the cast of the new film by delivering an impassioned speech about his first encounters with the first of the movies over a decade ago. “My name is Stephen Colbert, and if you are anything like me, you don’t just love these stories — you treasure the world of J.R.R. Tolkien,” he told the crowd.

Speaking of Jackson, Colbert said, “I was worried that somehow he would take away my treasure, my horde of precious Middle-earth stories. It was a very possessive, obsessive, very dragon-y feeling, so I found and followed everything I could about the progress of these movies.” He explained that besides just wanting the movies to be good, he wanted his Tolkien obsession to finally have social value, “that someone might say to me, ‘Hey Stephen, you know a lot about Tolkien. Can you explain something to me?’ And I would say ‘Yes, oh God yes, I will!'”

Watch Colbert’s speech, followed by the full panel below, via YouTube: