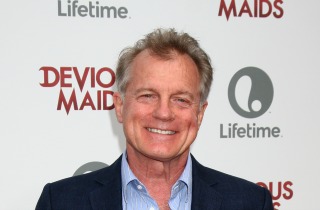 In an essay to be released in this week’s issue of People Magazine, 7th Heaven actor Stephen Collins will explain the details surrounding the sexual abuse of three underage girls that he admitted to in a recording released in October. In addition, the embattled 67-year-old actor released a shorter statement to the magazine in which he admits he has not apologized to two of the women, and says he has not “had an impulse to act out in any such way” in 20 years.

In the statement, Collins describes how the recording was taken without his knowledge or consent by his estranged wife Faye Grant, with whom he is in the middle of a divorce battle, during the couple’s “confidential marriage therapy session” in January 2012. Collins adds that he wants to reveal the full truth about what happened because some people have made assumptions about what he did that “go far beyond what actually occurred.”

“Forty years ago, I did something terribly wrong that I deeply regret. I have been working to atone for it ever since. I’ve decided to address these issues publicly because two months ago, various news organizations published a recording made by my then-wife, Faye Grant, during a confidential marriage therapy session in January, 2012. This session was recorded without the therapist’s or my knowledge or consent.

On the recording, I described events that took place 20, 32, and 40 years ago. The publication of the recording has resulted in assumptions and innuendos about what I did that go far beyond what actually occurred. As difficult as this is, I want people to know the truth.

I did have an opportunity to do so with one of the women, 15 years later. I apologized and she was extraordinarily gracious. But after I learned in the course of my treatment that my being direct about such matters could actually make things worse for them by opening old wounds, I have not approached the other two women, one of whom is now in her 50s and the other in her 30s.”

A 2012 recording from that therapy session, released in October, revealed that Collins admitted to repeatedly molesting underage girls for many years. As a result, the LAPD re-opened the case after it was originally looked at in 2012, and Collins was dropped from a movie and a TV show he was a part of. The same night the recordings surfaced, actress Donna D’Errico tweeted that she heard a single gunshot from Collins’s home, alleging that maybe he had killed himself. That turned out to be false.

In addition to the lengthy essay in People Magazine’s issue on newsstands Friday, Collins will sit down for an interview with Katie Couric that will stream online at Yahoo! and will also air on Friday’s edition of 20/20 on ABC.