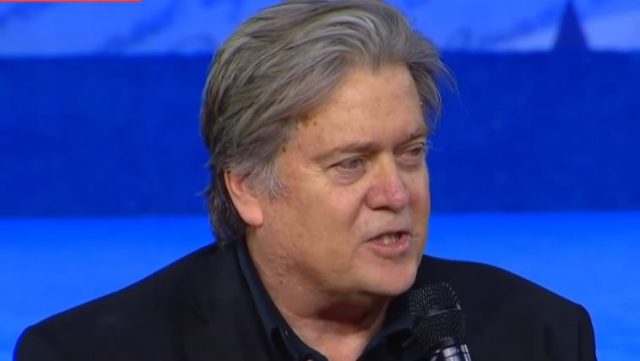 Last week, Breitbart chief and former White House chief strategist Steve Bannon became THE focus of political media when excerpts from Michael Wolff’s Trump tell-all were published. Among the many explosive remarks attributed to Bannon was his declaration that Donald Trump Jr’s 2016 Trump Tower meeting with a Russian lawyer was “treasonous.”

Needless to say, the president has not taken kindly to the book or Bannon’s comments, labeling Bannon “Sloppy Steve,” claiming his ex-advisor has “lost his mind” and stating that he is totally done with him. Meanwhile, Bannon has largely stayed quiet about the whole thing. Today ended that silence.

Bannon told Axios on Sunday that he was sorry for his comments about the president’s son.

“I regret that my delay in responding to the inaccurate reporting regarding Don Jr has diverted attention from the president’s historical accomplishments in the first year of his presidency,” the statement to Axios said.

He also heaped praise upon Trump Jr., calling him “both a patriot and a good man,” adding that the Trump scion “has been relentless in his advocacy for his father and the agenda that has helped turn our country around.”

Bannon further noted his comments “were aimed at Paul Manafort,” stating that Manafort “should have known [the Russians] are duplicitous, cunning and not our friends.”

And, of course, he said that his “support is also unwavering for the president and his agenda” and that he’s shown that support in his Breitbart radio appearances and international speeches.

It was reported last week that following the release of the Wolff excerpts that Bannon was going to release an apology to the president. He decided not to after Trump released a statement that day torching him.