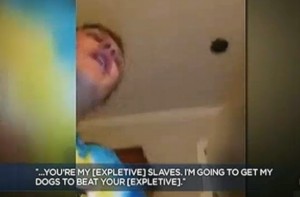 A prep school student got dismissed for a video of him using racial slurs, but he’s insisting he was simply quoting some of the language he saw in Django Unchained.

Video was posted on Twitter last week featuring a student dropping the n-word, saying “You’re my fucking slaves. I’m going to get my dogs to beat your ass.”

Other students got really outraged by this video and some even protested. Bullis has since dismissed the student in the video.

NBC Washington obtained a statement from the student in which he explained that he’s not a racist person and was simply channeling what was being said in Django Unchained after watching it:

I would like a chance to explain to my peers that I was mocking a movie and how disgustingly racist it was and the words were not my opinion and that I did not intend to hurt anyone. I have recently watched movies about racial violence after the Civil War for a paper that I am writing for English class and regrettably repeated the offensive behavior from a movie mocking how the situation was portrayed in the movie Django Unchained.

He offers a profuse apology and says he wants to “make it up to the whole Bullis Community and show them that I respect each and every one of them and deeply regret that I ever repeated such derogatory words.”

You can watch NBC Washington’s report above.