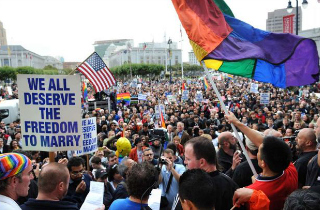 Here’s a politically incorrect statement which roughly half of you will agree with and half will take issue:

But before you go racing to the comments section to call me a homophobe, please note that I support the right for anyone to get married. No skin off my back…if you’re happy, be happy. Marry the one you love regardless of gender. And more Americans and politicians appear to be agreeing with that sentiment.

And this isn’t just a Republican thing. Not long ago, President Obama was against gay marriage. So was Hillary Clinton. But elections have a funny way of changing one’s principles. The President “evolved” on the issue a few months before the election last year. Mrs. Clinton just changed her mind about five minutes ago with an eye on 2016. The flip-flopping is all the rage on both sides of the aisle: For every Joe Biden and Bill Clinton, there’s a Dick Cheney or Rob Portman. On the media side, for every Rachel Maddow and Don Lemon, there’s a Bill O’Reilly and Megyn Kelly. They’re all for same-sex marriage. Even Karl Rove, a big voice in the Republican Party via his megaphone on FOX, also believes the GOP nominee will be an advocate of gay marriage regardless of how the Supreme Court rules on the matter.

Gay characters—once a big deal to cast in TV—are almost the norm, particularly on every cable-produced sitcom or drama out there. Simply put, gay is now mainstream. And the gay community is winning the PR war, as well as the hearts and minds of a majority of the country. Perhaps most importantly, they’re winning a growing number of potential Presidential candidates in 2016.

But the coverage the topic receives is still disproportionate. It’s everywhere, and we’re not just talking this week. It’s not just on TV…you can’t go more than a few Facebook status updates without running into someone opining about it, showing you how openly sensitive they are. Or when looking at another way, how morally superior they are to you, the vapid idiot who isn’t making an important political statement, but posted a photo of his dog playing in the snow instead.

Bottom line: I loathe hearing about anyone—gay or straight—drone on about marriage, particularly impending marriage plans (and yes, I’m married). It’s like hearing about someone’s fantasy football team…sure, it’s important to that particular person, but trust me (as someone who is emotionally invested in two leagues), there isn’t a soul on the planet who wants to hear about who you drafted and why, or what big trade you made that week.

– RELATED: Bet You Can’t Tell The Difference Between These Actual Anti-Interracial And Anti-Gay Marriage Quotes

Same goes for marriage: You’re gay? You’re getting married? Good for you. Look forward to getting an invitation.

You’re straight? You’re getting married? Good for you. Look forward to getting an invitation.

Just don’t share it in 74 Facebook updates on 74 consecutive days about how you just hired a band/DJ, picked out the place settings, are so psyched for the bachelor/bachelorette party, booked the honeymoon, mailed out all the invitations, or any other fantasy football-esque wedding planning that (again, trust me) ultimately only you and perhaps your Mom care about.

And divorcees going down the aisle again? Forget about it. Their sole mission is to prove to the outside world that they may have screwed up or got screwed over the first time around, but the sequel will be entirely different. On their wedding day, some may be writing the following at the altar itself: “THIS IS THE GREATEST DAY OF MY LIFE! YOU’RE NOT ONLY MY LOVER, YOU’RE MY BEST FRIEND!!!! I’M THE LUCKIEST (GIRL/GUY) TO HAVE FOUND YOU!!!” Umm…could you’ve just whispered that in their ear?

Some in the gay community can’t do the wedding part yet (but will soon, just a humble prediction), so the focus is on the ability to simply get married legally. Of course, homosexuals who want to get legally hitched aren’t tired at all of watching news or seeing Facebook updates around the topic. After all, it’s an important to topic to them, so screw me for being tired of it, right?

I get that. But when you’re just a small percent of the population (Gallup says 3.4 percent, while the Williams Institute, a think-tank devoted to LGBT research at UCLA, says four percent), why should the issue get such a lopsided amount of news coverage? After all, there are 30 million fantasy sports players who make up nearly ten percent of the country…you don’t see them inundating television and social media with our passion, demanding more attention (and that’s just a benign analogy, but it does make a point).

Note: The percentages above don’t account for closeted homosexuals who might not disclose to a random survey their sexual preference; and so the actual number is obviously higher.

Here are some bigger stories from this week you may not be hearing much about:

Are these stories as sexy (for lack of a better word) than a Supreme Court ruling on gay marriage? Sure, they may be more important (particularly the unthinkable horror that is Syria), but the Court ruling, the huge crowds in DC, the debate on various cable news shows…that what’s driving bigger ratings right now, right?

Actually (and surprisingly), no. Ratings last week were higher before the Supreme Court began hearing arguments on Monday (when the story really began to heat up). On Monday, when coverage was at its highest, ratings dropped noticeably. Tuesday’s numbers showed improvement, including a considerable bump for Rachel Maddow in the demo (but still not enough to overtake Sean Hannity). The mixed ratings don’t say same-sex marriage isn’t an important issue, it just isn’t as paramount to as many people as the media and your friends on Facebook would lead you to believe.

Again, I hope everyone regardless of sexual preference is allowed to get married in any state across the country.